Considering the universal acclaim heaped upon Australian quintet Tame Impala’s Lonerism of 2012 and the emergence of the likes of Toy and Hookworms, it appears that the music world is primed for a resurgence of rock psychedelia. Throw Kettering four- piece Temples into the revivalist mix and, alongside the aforementioned antipodeans, we have two extremely capable bands to lead us in this renaissance of kaleidoscopic sounds. 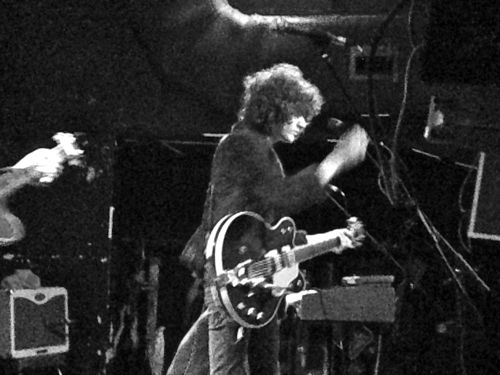 First coming to the attention of Heavenly Records founder Jeff Barrett after the self-produced Youtube efforts of guitarist/singer James Bagshaw (picturesd above)  and bassist Thomas Warmsley, the group have since caught the ear of the music press and garnered praise from British rock’s old guard in the venerable forms of Johnny Marr and Noel Gallagher.

As drummer Sam Toms’ thundering beat propels the band into opener ‘Sun Structures’ this reverence from two of British guitar music’s elder statesmen seems rather appropriate; Temples are so steeped in the past that one is not sure of having stepped aboard Bristol’s notorious nautical venue or into some paisley adorned time warp. The impressively voluminous mop of black curls upon Bagshaw’s head, combined with a long coat of scarlet fur, make the frontman almost eerily reminiscent of Marc Bolan while the 12 string jangle of his Rickenbacker during ‘Sand Dance’ bring forth evocations of The Byrds. Even Bagshaw’s Gretsch Country Gentleman, used alternately throughout, brings to mind Beatlemania era George Harrison.

Temples, however, are too good to be cast as mere copyists or gratuitous revivalists. After Bagshaw’s partial grumble that the near sell-out audience is being “way too quiet,” the crowd get more involved with proceedings during ‘Ankh.’ The song’s stomping grove and a chorus gilded by duel guitar string bends frees the hitherto unsure audience of its ambivalence and things start to move at the front. The post-chorus riff, favoured in synthesised form on the recorded version, comes forth in the shape of a tasty guitar riff from Bagshaw and it proves superior as a live performance. 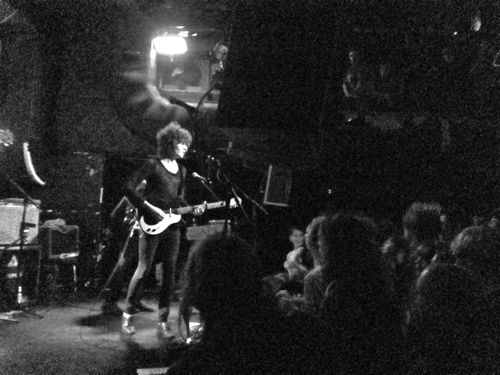 The crowd then really start to come alive; during second single ‘Colours To Life,’ some of the youngsters in the first few rows start being pushed and jostled into the foldback speakers at the front of the stage. A bouncer then enters into the melee and, despite being hugely outnumbered, it is a case of heavyset adulthood versus waif like youth and order is restored with little fuss. Containing hypnotic riffs of pure psychedelia and an accessible, anthemic chorus, the song displays a band on form and, despite their callow years, the young men from the Midlands certainly steer a tight musical ship.

While Temples are in possession of a precocious ability in regards to song-craft, it is with this musicianship that they are most impressive. Toms and Warmsley provide a solid rhythm section in the form of watertight grooves and keyboardist/guitarist Adam Smith alternates comfortably between instruments throughout. It is Warmsley who is perhaps the bonefide star of the show; physically resembling a young Bobby Gillespie, he moves restlessly in a straight back and forth line towards and away from his mic and he leaves no area of his fret board neglected as his inventive playing sees him effortlessly meander through the octaves.

Despite their youth and inexperience as a band in its nascent stages, the only moment of musical leakage is during new single ‘Keep In The Dark.’ Bearing a resemblance to Tame Impala’s ‘Elephant,’ the song sees Bagshaw vocally enter a couple of bars early at the final chorus but, with a wry smile, he instantly notices his mistake and adjusts accordingly.

Featuring a prominent 12 string guitar riff and reverbed echoing backing vocals, first single and career highlight thus far, ‘Shelter Song’ is the last track of the night and the 4 young men exit the stage having only entered it a mere 40 minutes and 8 songs earlier.

Stepping outside as I disembark from the Thekla, it is 2013 once more. While everything about Temples is so aligned with the past, their story has only just begun; if they continue to use the materials and musical lessons from yesterday to fashion such faithful and impressive recordings and live performance, they could be a band that very much belongs to the future.