For their final UK tour date Sydney Trio Jagwar Ma are treated to a packed house and an expectant crowd. The band’s bright sunshine pop, harking back to the Madchester baggy scene, has earned a solid following over the last six months, cemented by sets at major festivals such as Glastonbury and Latitude and regular airtime on stations including BBC 6 Music and Radio 1. Tonight the crowd urges them to come out, whooping long before they catch their first glimpse of the band. 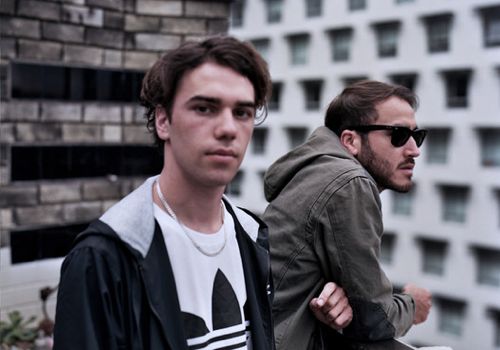 Lead guitarist and singer Gabriel Winterfield, mixer Jono Ma and bassist Jack Freeman amble onstage to muffled public service broadcasts and start with the loping, stoned-out What Love. Uncertainty features a bassline so deep that the stage equipment rattles audibly. The repetitive refrain ‘How can you look so gloomy, when you’re gloomy howling looks so good to me’ would make Happy Mondays proud.

Jagwar Ma have been typecast as being at the forefront of the recent baggy revival, and it is an image they are happy to cultivate. Winterfield is tonight sporting a Kangol bucket hat and retro Adidas trainers, a look made complete with his curtains haircut, and it is true that the band specialises in laid back dancefloor grooves with psychedelic leanings and lyrical minimalism. The Throw throbs muscularly and Winterfield is able to whip the crowd up with a combination of snake-hipped dancing and energetic bopping, with no audience member left standing still.

But it is clear the band’s influences stretch well beyond the Stone Roses. Jono Ma is particularly adept at cutting in rhythmic breakdowns, whether it be dubstep for What Love or hip hop beats for Man I Need. Come and Save Me and That Loneliness feature ’60s R’n’B inspired rhythms that would not sound out of place at the Temples gig at the same venue last night, and Four is neat dance-punk.

Jagwar Ma also betray the floppy limbed, stupefied stereotype of baggy by being highly competent and switched-on musicians. When Winterfield’s guitar string snaps on Man I Need, he is able to surge straight into a solo with a replacement guitar, thanks in no small part to the sterling efforts of the band’s roadie. When the set finishes the crowd implores them to return for an encore, which they duly do.

Thekla is the floating Bristol venue converted from an old cargo ship, and Winterfield introduces the final song, That Loneliness, by saying that they want to “rock the boat”. It is a sentiment that the crowd enjoys, as tonight, Jagwar Ma truly have rocked the boat.