I may not be willing to queue up from 6am anymore, but I still get excited about Record Store Day each year. the number of participating shops might be dwindling, two of my local participating shops have ceased to be since I first heard of the event, but the list of limited or exclusive records being made available seems to get longer each year.

Go to the Record Store Day site and you’ll see 17 pages listing the different items available ranging from ∆ ∆ (the secret of being first in a list is using some alphabetically tricky symbols) to Zoe Howe (a book rather than a record in this case). 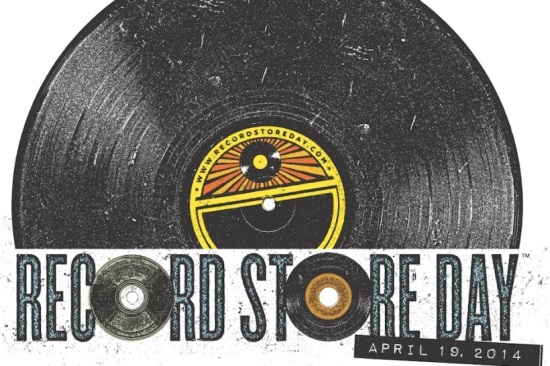 The only way to be certain of getting the items you want from the list is finding a shop that stocks most of them (I’m lucky in that Brighton’s Resident Records always has a huge stock of titles) and get there very early. I’m going to have to hope that my (relatively) short list of “wants”, including Devo, Neko Case*, Grant Hart, Luke Haines and The Lemonheads aren’t on the lists of all the early risers.

Among the pick of the other Record Store Day releases is a vinyl limited edition reissue of The Twilight Sad’s astonishing and haunting 2007 debut album Fourteen Autumns and Fifteen Winters.

Remastered with bonus tracks, including demos, the album has not lost its impact, with lead singer James Graham’s beautiful Scottish vocals sounding better than ever on key tracks such as Cold Days from the Birdhouse.

However, top of my list is a glow-in-the-dark 10″ version of the Ghostbusters’ theme tune. The original 12″ release of the Ray Parker Jr classic was one of my first record purchases, but was sadly mislaid some years ago. A limited edition luminescent version can finally fill that hole in my collection, if it isn’t snapped up before I get there that is.

There has been some controversy this year, and a recent Quietus article explores some of the problems that the day creates for independent labels. Independent labels losing out to the majors in terms of getting vinyl pressed is one issue, but also highlights that there could be a place for a UK based pressing plant in an invigorated climate for vinyl. Another concern is that this year there are 643 releases, compared to 277 three years ago, which suggests that the quality of releases is being compromised in favour of sales that the event generates.

These reservations aside, it is a successful event that clearly helps a lot of the shops that take part and gives an annual boost to a struggling part of the highstreet. Perhaps some tweaks in the next twelve months would be wise by the organisers, scores of average releases will undoubtedly lessen the impact of the more interesting ones. However, if it gets people through the doors of their local record shop spending money, then perhaps that is enough?

*Since I originally drafted this post I have seen that the Neko Case and Jason Lyttle 7″ version of  ‘Satellite of Love’ has a list price of £14.99. One of the criticisms that people have of Record Store Day is that loads of the releases are overpriced and therefore aimed at Ebay and not fans. Charging £14.99 for a 7″ inch single, even if it is a limited edition coloured vinyl single, is just too much.