It has been heartening to witness the rise and unstoppable rise of the uniquely British phenomena that is Public Service Broadcasting.

Since the somewhat low key and unheralded release of their May 2013 debut album Inform Educate Entertain, Mr J. Willgoose Esq, the act’s guitars, gizmos and inert corduroy fashion icon, and Wrigglesworth, PSB’s drum machine in human form, have been on a rollercoaster (a rollercoaster that only goes up and has no downy bits) of enthusiastically received live shows and festival appearances, culminating in last year’s Neon Filler endorsed, chaotically joyous Glastonbury shows. 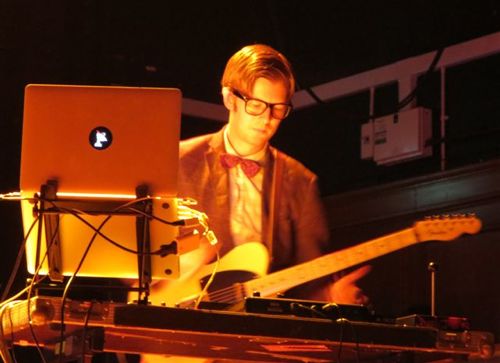 The sheer inventiveness and uniquely original concept of the album with all its BBC archived samples married to an almost Krautrockian (especially Neu), propulsive drumbeat and treated guitars has proved to be a genius trick. By word of mouth alone they have, to paraphrase Fatboy Slim, certainly ‘come a long way baby’. More nineties references ahead, you have been warned.

The venue tonight, was deep within the labrynthine bowels of the University of Leicester campus and looked like a mini-Hogwarts dining area, all very woody and proving to have some good acoustics.

Before our main PSB meal though we are served up some fine punky shoegazey salad (what I like to call shoepunk) from a trio hailing from South London going by the not very thrilling name of Happyness. 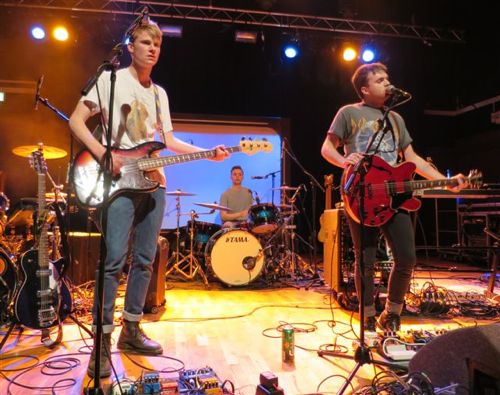 Their first number kind of meandered along directionless and lulled you into a false sense of security because the rest of the all too brief set was punctuated by a more twisted and rockier sound. I spoke to Benji the guitarist (wearer of a very dubious and hopefully ironic Def Leppard T shirt) afterwards and he told me enthusiastically how much he loved Sonic Youth and Dinosaur Jnr. The Sonic youth element I could certainly hear, although it was Sonic Youth filtered through a politely British filter. They have a number called Great Minds Think Alike, All Brains Taste the Same… so they get my vote. Happyness are playing a fair few festies this year; go check them out.

A very reserved Leicester crowd go slightly enthusiastic when our dynamic duo Public Service Broadcasting  take to the stage (perhaps they are in shock from hearing that the city’s most famous authoress Sue Townsend, mother of the fantastic Adrian Mole has passed away), whatever the reason the crowd initially remain rather subdued. 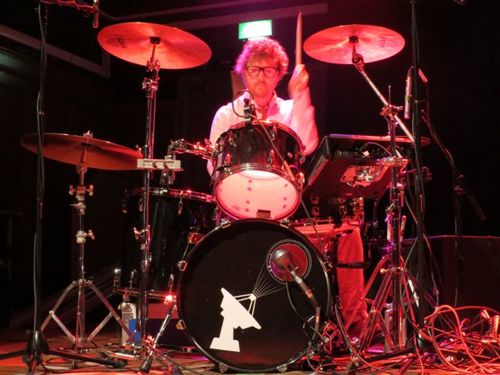 First thoughts include, ‘blimey Mr J. Willgoose Esq has got 3 guitars now, and ‘that looks like a new shiny drum kit’ and ‘oh! They’ve invested in a bigger tele’ (the old wooden and cardboard thing that adorned their sets last year is now history).

The pair seemingly play the entire album, every track now something of a classic, with accompanying black and white archive footage of everything from spitfires, dogfights, go- go dancers, gas masks and assorted random snippets of dialogue. It proves a mesmerizing mix of sound and trippy visuals.

Of course Willgoose never says a word, he uses his laptop to do the talking, he appears to have sampled responses to anything you can shout at him, at one point, he just randomly used the laptop to say ‘Walkers crisps’, love it !’.

He introduces two new numbers both about Dutch skiers, go figure! It would have been nice to hear more new stuff but I’m sure it’s all in the pipeline for album number two.

By now after spiffing versions of Spitfire, Night Mail, The Now Generation and a blistering Signal 30, the crowd are really up for it and they finally wake up, but its too late. An hour is all you’re getting. The New Order-esque melody of Everest becomes a reluctant encore, it floats in the air and puts a smile on everyone’s faces, and that’s yer lot

But wait! Is there friction in the camp? After Everest, Wrigglesworth didn’t come back on, he left it up to a somewhat confounded looking Willgoose to thank us all for coming (in the computer voice of course). Is there mutiny in the lower ranks? Stay tuned.

As I wandered out I couldn’t help thinking Adrian Mole would love  Public Service Broadcasting, they’re clever, they’re subversive, probably had bad acne when they were teenagers and probably one of them went out with a girl called Pandora Braithwaite.

Funny what you think about when you’ve had half a bottle of absinthe before going to a gig.