It’s all about the voice with Bridie Jackson and The Arbour, the North east of England folk act that scooped 2013’s Glastonbury Festival Emerging Talent award. 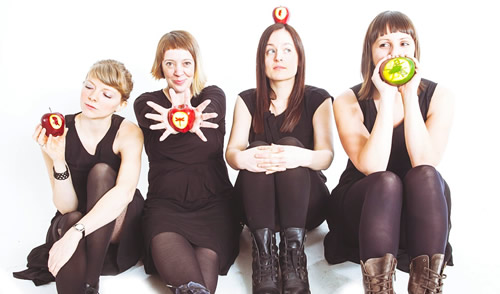 For their second album New Skin they find themselves with a whole bunch of new fans from across the UK thanks to the accolade and this month notched another high profile live performance to their gigging bed post with Brighton’s The Great Escape Festival. Those watching them and listening to this album will immediately pick up on Jackson’s gorgeous, genre busting voice. At times she sounds like Tracy Thorn, who was equally at home with indie music, soul and trip hop.

The bulk of the tracks on the first half of the album here are vehicles for her voice, lacking a catchy melody but instead focusing on mood with the string instruments of cello and violin adding drama in the right places and mood when needed. They never get in the way of her voice.

But it’s not all about mood. The second half of the album is full of some fine melodies too, including Scarecrow latest single We Talked Again We Talked Again, which is more akin to the indie pop of Stars track My Ex Girlfriend is Dead than the folk genre they inhabit.

Crying Beast is another highlight in this excellent final half to the album. If there are any criticisms to be found it is that some of these later tracks should have been moved further forward, following the Bob Mould method of always putting the key single at track two. But that is a minor grumble seeing as the first half successfully puts the listener in the mood.

They’ve come a long way since we first saw them perform at the Glastonbury Festival Emerging Talent finals, a competition we help judge, and on the strength of this album they have even further to go.