Luke Haines loves a concept album, his last three solo albums all being concepts and his interest in such things dating back to the Baader Meinhof album in 1996. So it makes perfect sense for him to devote an evening songs from his excellent New York in the 70s album, released last month, and his seminal response to the terrorist Red Army Faction. 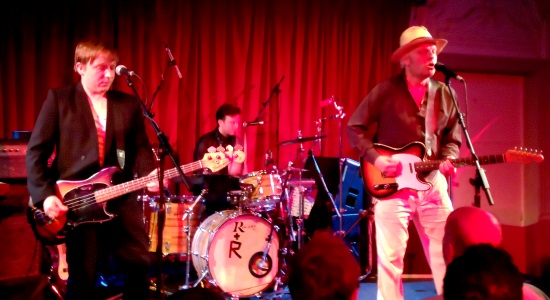 Haines is a very well respected recording artist, whose reputation for misanthropy and bitter barbs has served him much better in recent years than it did when he was making a play for pop stardom with The Auteurs. He is perhaps less well known for being a top draw live performer and a pretty handy guitar player. In classic power-trio mode he is backed by a tight bass and drums section and together they sound pretty great all evening.

The songs from his most recent album may divide the critics (even on this site) but they are  punchy live and are arguably improved when separated from the deliberately hissy 70s production style.

All the songs work well tonight but ‘Jim Caroll’ (my favourite song from the album, with some of the best lyrics) sounds particularly good, with ‘Cerne Abbas Man’ coming a close second.

The Baader Meinhof section of the evening manages to be even better, and sounds incredibly fresh for a 70s themed songs originally recorded almost two decades ago. It is an incredibly cohesive record, so it is hard to pick out any songs that are better than the rest from this set, but the opening trio of ‘Baader Meinhof”, ‘Meet Me at the Airport’ and ‘There’s Gonna be an Accident’ is pretty hard to beat.

After the main set ends Haines returns to the stage solo for acoustic renditions of three songs, one apiece from each of his other recent solo records. Fans of The Auteurs even get a brief treat as he inserts a long section of ‘Junk Shop Clothes’ into the middle of ’21st Century Man’ right after the lyric “I was all over the 90s, I was all over in the 90s”.

After the end of this set the band returns again for one last song. Repetition is one theme of New York in the 70s album so there is no little humor in them playing ‘Lou Reed Lou Reed’, the albums most repetitive song, for the second time. The crowd don’t mind, we’ve been treated to enough high quality music for one evening and Haines is aloud that last indulgence. A rock and roll one off playing a gig that must be up there with the best of his career.