The seven-strong collective, formed by saxophonist Mark Buckingham and guitarist Steve Haworth three years ago, opened their set with a beautiful instrumental by the American jazz legend, John Handy. 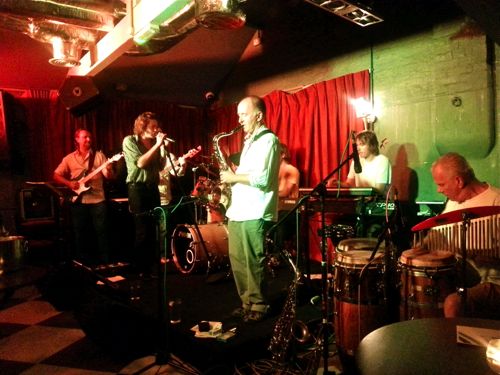 Like many of the other musicians the Groove Warriors cover, John Handy came to prominence in the 1950s and 1960s. In fact, unless you were very familiar with the early jazz and soul scene, there’s no way you would realise that the Groove Warriors are a cover band.

‘We chose obscure tracks to open people’s eyes to a different side of music,’ Haworth told me after the gig. Other musicians covered in the band’s first set included John Coltrane, War and The Commodores. ‘That’s the old Commodores though, back when Lionel Richie was the keyboard player,’ Haworth points out quite sternly.

Learning about the band’s choice of tracks and their influences is like taking a mini-degree in the formation of modern music.

The second set, played at the stunning riverside venue included a fascinating funk track called Dusic by Brick, discovered by their saxophonist when he was fishing around for material to play with his other band, The Jammers.

It was at this later stage in the night the Groove Warriors also started to introduce material that the audience would more easily recognise, including Daft Punk’s recent pop hit, Get Lucky. Haworth explained that it sampled the American producer/musician Nile Rogers on guitar. This musician is the lead guitarist and co-founding member of the 1970s band Chic. His guitar sample used by Daft Punk exactly mirrors Haworth’s uplifting funky style, and I can see why he’s selected this tune for the band.

As you would expect for any group that gets a gig at the world famous Bull’s Head, this one comprises entirely of professional musicians with their velvet-voiced singer Vic Bynoe, currently absent, due to a tour with the Drifters. Warrior members write music for TV and film and between them they’ve played with and produced Dave Stewart, Simply Red, U2, Bob Marley, Paul McCartney, Elton John, George Michel and so many others, I don’t have space on this page to mention. But they couldn’t possibly be any more down to earth and clearly have fun while on stage, grinning and laughing with each other, despite tackling some technically challenging tracks and adapting them, taking it in turn to delve into lengthy solos.

The band come together to play as The Groove Warriors primarily to have fun, Haworth explained. This means the lucky residents of South West London can listen to a vastly-experienced band in a small unpretentious venue at little cost when they’re on.

This was the second gig in two months for the Warriors at the Barnes jazz and blues venue. And with a further booking for August, it looks like the Warriors could be set to become a regular feature here.

The Bull’s Head opened in 1959 at the same time as Ronnie Scotts and was at that time referred to as its suburban equivalent. In the 1980s, its jazz-centric music policy was broadened out to include blues, rock and soul, attracting a broader, but no less specialist audience.

The Bull’s Head was featured in Martin Scorsese’s documentary film series about the Blues in 2003. Controversially, the venue was taken over by new management last year. However, the quality of bookings here remains as good as ever, bringing known and unknown gems to its recently refurbished intimate performance room. Including The Groove Warriors, a charming, talented, witty cover band with a difference.

The Groove Warriors will be at The Bull’s Head in Barnes again on Friday 8 August. For more information click here.