When going to camp at a music festival there aren’t that many things you need to ensure a good time. Enough money for food and drinks (and any merch you might desire), a sleeping bag and enough clothes to last the three days. What you do need however is a tent, and discovering that nobody in your party remembered to bring one after you’ve already driven the 130 miles between Brighton and Northampton is a bit of a panic moment. Luckily we live in an age of convenience and a quick online search, followed by a trip to the nearest Argos, saves the day. 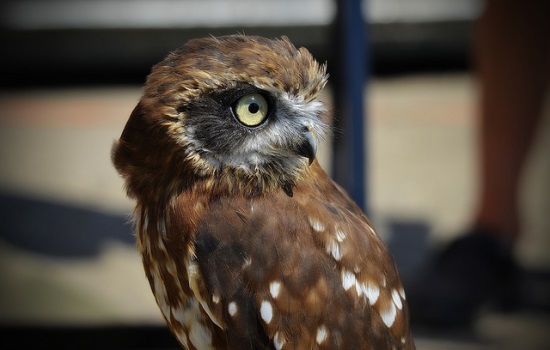 The combination of a tent diversion and a three hour traffic jam on the M25 means that by the time we get to the festival site we have already missed three of the four bands on offer for the first evening. The good news is that the weather is lovely, the owls are out, the bar is open and we still have Allo Darlin‘s set to look forward to. 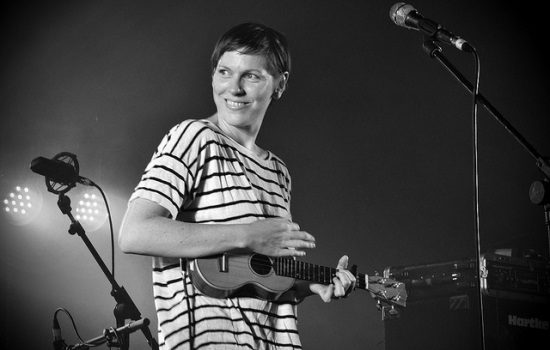 I love the type of bands that play Indietracks, but I can understand why a lot of them are a cult concern. Allo Darlin’ on the other hand have everything it takes to be one of the few bands on the scene that deserve a big crossover moment. The new songs they open the set with sound great, but it is the favourites from their last two albums that the festival crowd want. Each band member does their thing perfectly tonight, bouncy bass (playing the slap bass interlude on a cover of ‘You Can Call me Al’ is particularly good), skilled guitar work and a captivating front-woman. It is ‘Tallulah’ sung solo that remains the high point of their set, magical stuff.

The following day has a  much more relaxed start to it with a visit to the train sheds, the obligatory owls and then some excellent music.

First up is Ace City Racers, a bit noisier than expected with some of classic rock and roll in their sound. There is even a touch of Australian veterans The Hoodoo Gurus about their early songs. Skeletal Shakes offer us a sunnier more acoustic set on the appropriately sun drenched outdoor stage. They are nice enough but a very limp cover of ‘Heatwave’ does rather expose the bands limitations.

‘Heatwave’ would have been an appropriate track as part of Bill Botting‘s set on a very hot and crowded train. It is a performance that shows he has good enough songs and a good enough voice to stand alone away from Allo Darlin. The intense heat and some obvious nerves lead to some mistakes and fluffed lines, but you can’t not feel positively inclined to someone who plays a cover of ‘God Only Knows’ accompanied by a woman, babe in arms. 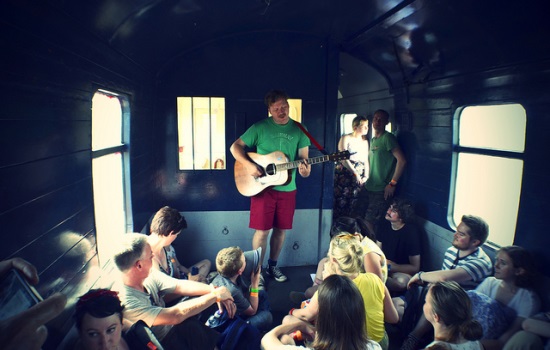 Escaping from the train to some desperately needed fresh air we catch the end of Thee Ahs‘ set. They have  have a cute sound, not entirely dissimilar from Go Sailor, but with less immediately memorable songs. The Yawns follow and are a more interesting prospect. Although advertised as a five piece they seem to have lost two members on route to the festival. Their mixture of drones and feedback may not quite suit a sunny afternoon but they do make for a refreshing change. 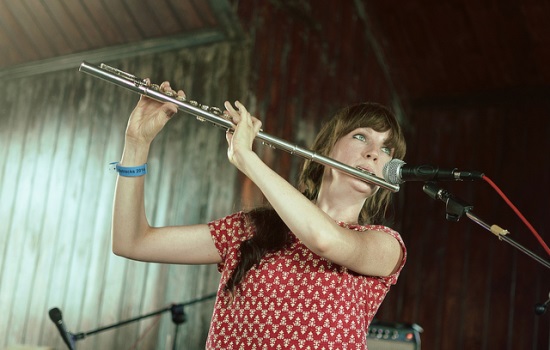 In the church the change of pace continues as we are greeted by Laura J Martin. Starting out at a piano playing songs that sound like a more cultured Gorkys. When she gets to her feet to play a whole mix of instruments things get a lot more frenetic and experimental. Playing a mixture of solo, and accompanied, the musicianship is of a consistently high quality. The looped elements of the songs are complex and recall Andrew Bird, with some arrangements that evoke Sufjan Stevens. Pretty great stuff.

I first heard/saw The Spook School at Indietracks in 2012 and they sound just as much fun two years later. Good songs played with enthusiasm is a winning formula, and they have a pretty good pop sensibility. It is their amusing drummer that attracts the most attention on the stage with his between song interludes, but the song ‘Something’, sung solo,  is a powerful moment. 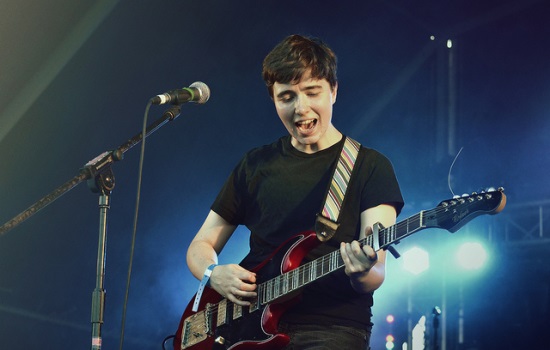 Despite being a Brighton band I don’t remember any of The Popguns’ songs, so it is hard to be nostalgic about them. They play a pleasant set and get a good reaction, but I think familiarity would have added a lot to my enjoyment. Your enjoyment of Dean Wareham, inside the train shed, also rests to some degree on how well you know his work. I know a bit but not much, and the stage performance is rather a dry experience. However, the quality of the show on a purely musical level is pretty exceptional, and he makes a pretty good noise with his guitar. There are a some pretty captivating moments and you can see why he has such a legendary status, among those in the know at least. 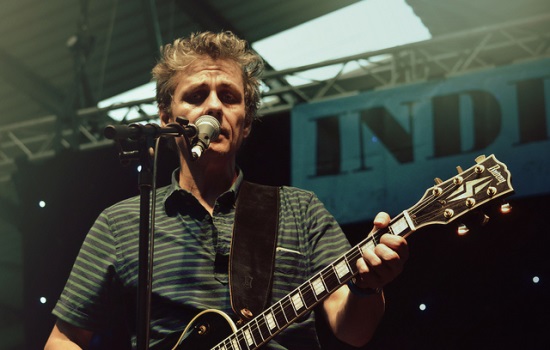 My Gruff Rhys experience is rather blotted by an incident involving my nose and a horse fly. I’ll not not dwell on this but suffice to say that it wasn’t a fun way to miss the first half of his excellent set. This gig-come-lecture is based on his American Interior album and divides equally between his ancestral story and the songs from that album. He is witty and engaging, the story is interesting and the songs are of the high quality we’ve come to expect from the former Super Furry Animals front-man. It is a lovely end to the evening (musically at least). 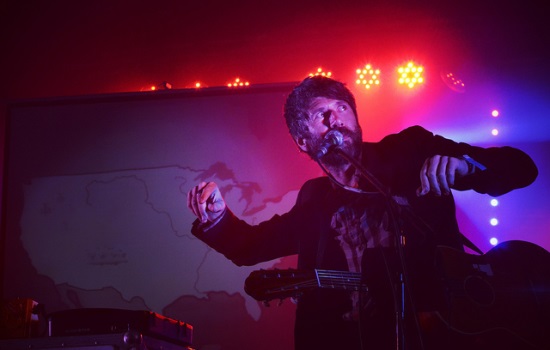 Axolotes Mexicanos bring some very enthusiastic punk pop to the stage to open proceedings on the Sunday. Officially the sweariest band so far, but in Spanish so I only recognised a handful of the colourful sounding phrases. Enthusiasm wins over competence through a set that is low on musical skill but high in charm.

The Thyme Machine have a front-man dressed as a leopard, offer a comedy description of their home town (Lancaster) and also sing about their favourite seabird. Sometimes that is enough. On top of that we get a set of amusing songs in the tradition of Half Man Half Biscuit, songs that are available to buy on floppy disc in the merch tent. Between songs they distribute Tunnock’s tea cakes to the crowd (I manage to catch one) and fire glitter confetti cannons. All in all it is a surprise highlight of the day. 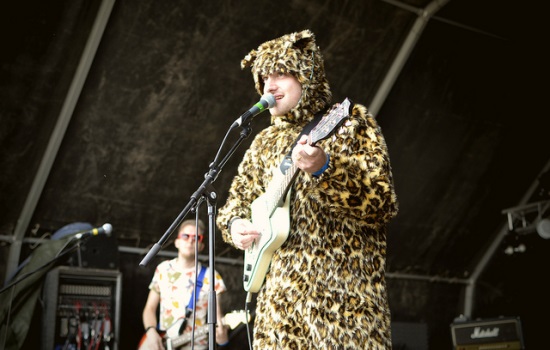 The afternoon is spent wandering between stages catching bits of Bordeauxxx, seeing The Hobbes Fanclub playing to a very enthusiastic crowd and heading off for a train-ride.  Indietracks is a unique festival in many ways and it is important to take the time to soak up the atmosphere of the whole site and take enough time to enjoy the various (warm) alcohol on offer.

Back at the main stage Sweet Baboo play a sweet and melodic set that sits really well in the early evening sun. These are good songs played well and with a distinctive voice. There is something about Sweet Baboo that promises more, and I think future albums will demand some attention.

Mega Emotion‘s performance in the Church is something else entirely, starting out with all three members singing and playing drums to an analogue synth backing. Through the rest of the set abrasive post punk guitars sit alongside a very 80s synth pop feel. Early Devo springs to mind as does the sound of Sheffield in the late 70s/early 80s. 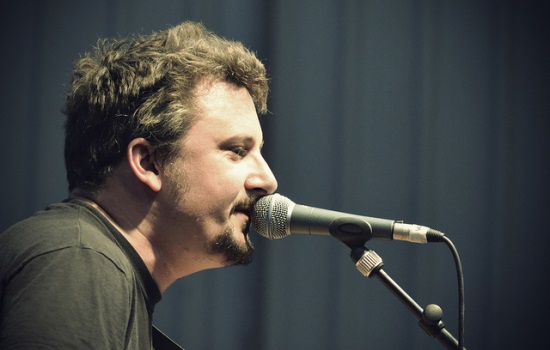 Each festival really needs an act that can play anthems and Withered Hand are that band. They play brilliantly and the songs sound great tonight, the crowd getting behind the big choruses and impassioned performance. Recent album New Gods is heavily represented and ‘Horseshoe’, ‘Black Tambourine’ and ‘Heart Heart’ all go down as great sing-a-long moments with the audience. 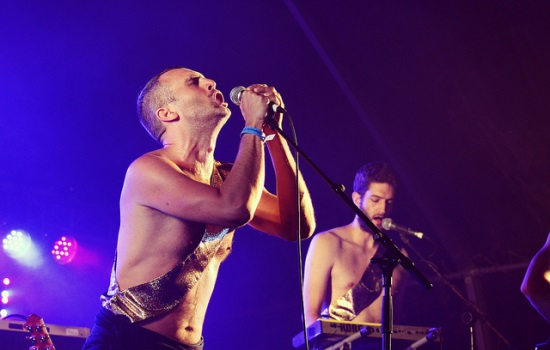 I don’t really know anything about The Hidden Cameras beyond having heard the name a few times over the years. One of those times being hearing how their set  was abandoned due to power failure at the Indietracks event in 2011. Technical hitches aren’t a problem tonight and the band look distinctive dressed in matching black kilts and gold sashes.

Their sound is full and has plenty of drama, with very nice arrangements, but my initial concern is that it lacks a little in fun. Like Still Corners last year they seemed to be overly serious for a final night headliner. But as they communicate more and the set progresses they relax and more humour and personality start to come through. I can’t confess to being able to remember one song they played, but they won me over with a strong and confident set.

The music finished there is enough time left to enjoy a last drink, an ill-advised burger and wish  a final farewell to the owls before heading back to our tent (which surprisingly survived the weekend despite a budget £20 price-tag). Indietracks remains a unique event in an increasingly homogenised festival calendar, and long may it continue. It is unlikely to ever be more than a cult concern but for those that choose this event to get their festival fix they are guaranteed a weekend to remember.

Top 5 acts of the weekend:

To see more of Nic’s pictures from the weekend go to our Flickr page.