Are you looking for the missing link between early Grateful Dead and Ash Ra Tempel, with a sprinkling of Ozric Tentacles and Guru Guru ? Thought not. But please be assured you need to hear Causa Sui, a frighteningly talented band of musicians who like nothing better than spending their Dutch downtime jamming in spectacular fashion, creating complex and often lengthy guitar based instrumentals. Their power of intuitive improvisation is a thing of majestic awe. 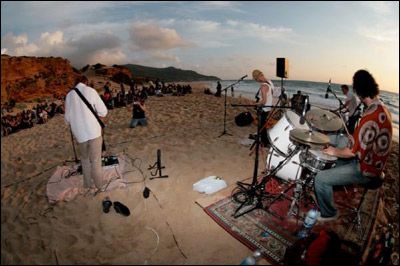 Last year saw the release of their sprawling studio masterpiece Euporie Tide and Pewt’r sessions 3 is the third (surprisingly!) in a bunch of studio improvs with guest guitarist Ron Schniederman from the Sunburned hand of man. It contains a mere three tracks, but one of which is a huge 25 minute pulsating behemoth called Incipiency Suite, a glorious trip, quite mellow and almost ‘jazz’ at times, really quite ear friendly. The other two tracks are more typically Causa territory, faultless brashy psych and atmospheric blue. They have amidst their number a secret weapon, one Jonas Munk, a young guitarist who displays great sensitivity, restraint and explosive power in his playing. My new favorite band.