Situated near Porthmadog on cliffs that tumble down to Cardigan Bay, Portmeirion started life in the 1920s as the whimsical vision of Welsh architect Clough Williams Ellis.  Since then it has provided the real life surreal backdrop to 1960s TV show The Prisoner, is one of the Wale’s oddest tourist attractions and each September is the setting for the music, arts and literature focused Festival Number 6. 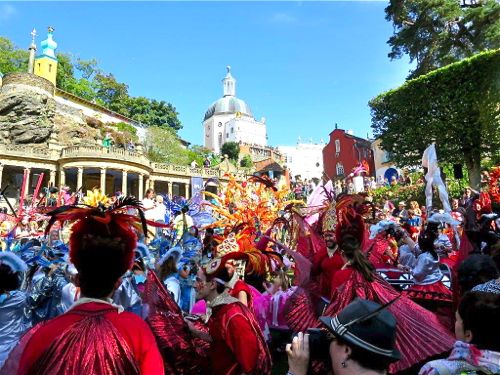 Now in its third year, the festival, which is named after the hero of The Prisoner,  is getting into gear, with the previous two events marred by bad weather. Thankfully though Martha Reeves and the Vandellas, who were among the performers, brought her Heatwave with her and the event was blessed with torrential sunshine. Sunday was especially sun soaked with the location mirroring the town’s Italian Mediterranean inspiration perfectly as festival-goers took to boarding, swimming and sun bathing.

Among highlights of the Friday bill were a rockin’ teen combo called Childhood. These ex-Nottingham University chaps certainly have a classy set of self penned tunes; melodic with fits of noise. Apparently they are bemused by comparisons as they are so young and are not familiar with half of the references, but older listeners might like to think Teenage Fanclub meets The Byrds. 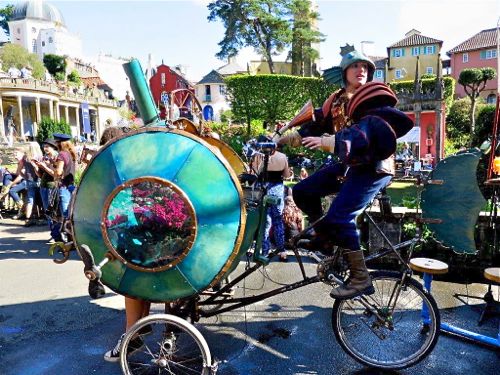 Down by the sea, in a small marquee we cross paths with the bearded and dishevelled post punk singer/songwriter/Krautrock afficianado and now novelist, Julian Cope. He spends an entertaining hour telling us how great his new book is. You do not disagree with Julian, although toward the end of the interview a guy decides to have a go at him for not being green enough by writing paperbacks and using up trees. Sadly though this exchange was cut short by a guy from Cope’s publisher Faber and Faber and Cope’s declaration that, “I’m sorry but the trees must fall, my book must be read by everyone.”

It’s an incredible 14 years since Damon Gough, aka Badly Drawn Boy released his Mercury prize winning album Hour of the Bewilderbeast. I am happy to report that he’s still a magnificent live draw as he played to a packed crowd on a small stage in the woods. With the sun shining and the atmosphere electric he proved to be an absolute top bloke with an arsenal of fine, memorable tunes and a deadpan wit that the crowd just loved. Anyone who can deftly drop in a cover of The First Picture of You by The Lotus Eaters three numbers in, is a bloody star. 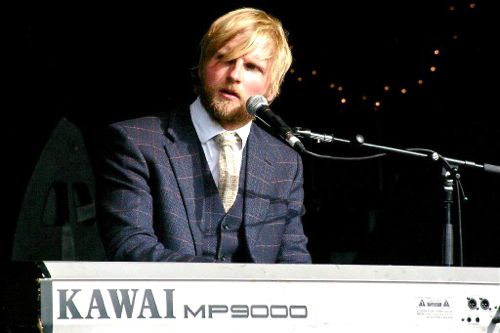 Manchester poetry mafia takeover in the afternoon with a great in-yer-face performance by Mike Garry. He swaggered, shouted, swore and even got people to dance to a poem about former Factory Records boss the late Tony Wilson.

London Grammar headline Friday night and we ask ourselves, ‘why?’You know that point in the evening when you want nothing more than a groovy, happy stupid dance; when you want to get down with your bad self and hug a complete stranger? Well, if that’s your bag don’t book London Grammar.

Fortunately Andy Weatherall and his DJ chums were on hand until 4 am and thankfully groove is in the heart people. We find a castle with a bar and watch old Welsh farmers get pissed and sing songs about sheep.

Saturday is a blur of carnival colour, intimate gigs in a quiet rooms on shiny wooden floors, in particular the great Steve Mason playing a set of his songs with arrangements by composer in residence Joe Duddell. This took place in a hushed packed room of about 50 of us, listening intently as he sang accompanied by a string section. With the sun flaring in through giant windows behind him it was a beautiful experience. 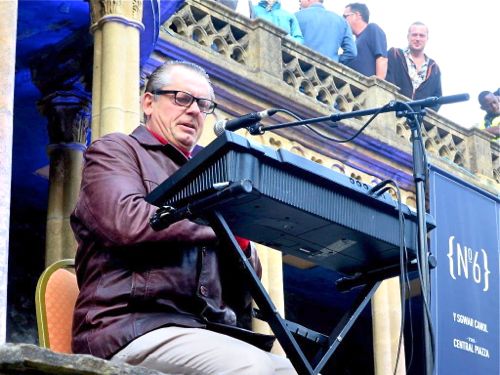 From the sublime to the ridiculous. Less than an hour later and barely 200 yards away John Shuttleworth, aka  Graham Fellows, blows London Grammar away with hilarious renditions of his classics Can’t go back to savoury now, Two margarines on the go and Pigeons in flight.

On the main stage a gentleman by the name of Tom Hickox is a discovery, playing piano and delivering his songs with a deep, not unpleasant voice somewhere akin to David Sylvian and Nick Cave, he captures an unsuspecting crowd and goes down a treat. He mentions a debut album produced by Richard Hawley, must investigate. 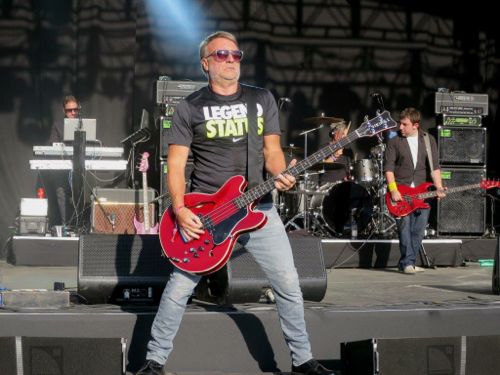 Peter Hook, along with his band The Light, continue to uphold the Joy Division back catalogue since his acrimonious split with New Order. Despite his voice going he makes a bloody good fist of it and manages to capture some of the Ian Curtis in the songs. And what songs they are: 24 hours, Isolation, She’s Lost Control and of course Love Will Tear Us Apart. Supplemented with a smattering of early New Order and you have a gem of a set.

Beck is an elusive enigmatic individual not prone to hectic touring schedules. It is something of a coup that Festival Number Six secured him as Saturday’s headline act. His was an astonishingly good show, perhaps the best performance of the weekend, with a visually stunning light show and a six-piece band of dynamite players. He looks dapper in his little black hat and seemingly not aged in the 20 years since he burst onto the scene with the fabulous Loser. 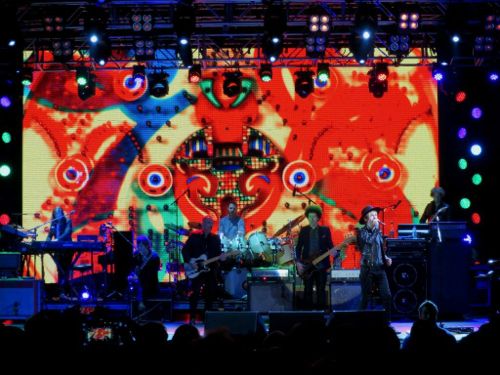 A big guitar chord heralds the arrival of Devils Haircut, a deranged riff of epic proportions ensues, the crowd go bonkers, superb as that is, the next hour or so remains equally delirious, he gives us Black Tamborine, hell yes, New Pollution, Loser, (a version that will remain with me forever) as well as a covers of I Feel Love, Blue Monday and The Rolling Stone’s Miss You. For the encore there was Sexx Laws and the fantastic Where It’s At, mindblowing.

As for Sunday, Derry’s most famous sons The Undertones played a good set, minus Fergal Sharkey but still rocking. It was great to hear some of their early John Peel endorsed punk rock poppery, I Don’t Wanna Get Over You, Jimmy Jimmy, My Perfect Cousin and Teenage Kicks, the latter prompting hordes of people to descend to the front suddenly realizing who it was as they had been listening to.

Elsewhere on Sunday The Pet Shop Boys did a rousing version of Go West with the Brythoniaid Welsh male voice choir, ex-Fall bassist Steve Hanley talked about the writing of his new book, detailing his time in this most iconic of bands.  With the combined effects of heat exhaustion and rum at one point I nearly bought a bespoke jacket for £400, fortunately the price tag suddenly sobered me up. With aching feet we surrendered to the sun and listened to a bunch of DJs playing German techno on the seafront. 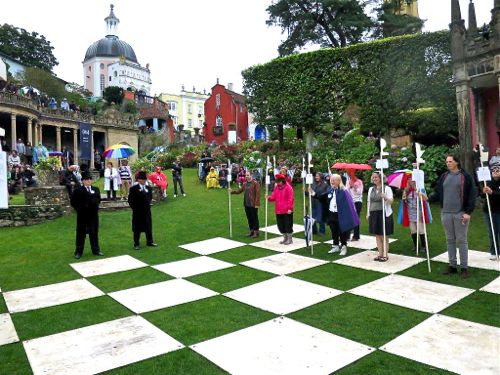 Festival Number 6 is all this but so, so much more. There was also comedy, street theatre, very, very hot curries, more authors, artists, the anti-pissing up fences police, real people chess and the lampshade ladies.

Clough Williams Ellis we salute you.