Former Death in Vegas man Ian Button has roused the troops and drafted in some talented foot soldiers for his second album under the Papernut Cambridge moniker.

With collaborators, such as Mary Epworth, ex-Hefner men Jack Hayter and Darren Hayman, Picturebox’s Robert Halcrow as well as Gare Du Nord label mates Robert Rotifer and Ralegh Long,  Button and friends have conspired to create one of the year’s best pop releases. 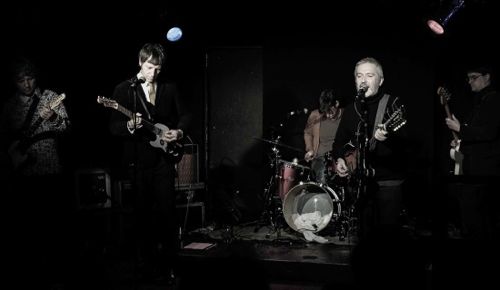 Full of pop nuggets, with a few hints of 1990s Brit pop and lashings of 1967 psychedelia, it is the most English of albums with lovely Monty Python-esque notions like the government going on strike as well as the Ray Davies borrowed imagery of commuters traveling back to their Shangri-Las, rising out of the London Underground catacombs to the beautiful, suburban sunset above.

Among many highlights is the great pop of When She Said, What She Said,  the aforementioned The Day The Government Went On Strike and the album’s Underground free title track.

Another is the lovely, 1960s infused tragi-pop of Umbrella Man. With its lovely melody it is no wonder John Howard, the 1970s singer-songwriter and collaborator of Button, covered this track earlier this year.

The 1990s Britpop comes courtesy of Nutflake Social. It’s like the moment when The Soup Dragons went ‘baggy’ in the early 1990s, except good. This track also features some fine David Bowie Low era harmonica from Nick Tidmarsh to usher in some 1976 pop into the mix.

There are a few artists like Button who excel at traveling down this nostalgia-pop route. Jim Noir and Voluntary Butler Scheme are the two most well known that spring to mind and their fans will adore Papernut Cambridge and There’s No Underground’s unpretentious take on the great English pop album.

There’s No Underground is released by Gare Du Nord on 13 October. Click here for more details.