It seems wrong to start a review of such an excellent gig on a negative note, but I feel the need to run through things in a chronological order. The minor gripe about the evening is the support act that greets us as we arrive at Bexhill’s wonderful De La Warr Pavilion. Arriving at 7.30 seemed reasonable, given a 7pm ticket start time, but the running order lists the support act as being “DJ Justin Spear” with the main band not hitting the stage until 9pm. Listening to someone play records, and with not a huge amount of finesse, to a near-empty room is not a great way to spend your time; even if those records are pretty good.

Thankfully the building, and the surrounding environment, is not a bad place to hang out and there is a pretty decent gift shop to waste a bit of time in before the main event starts. 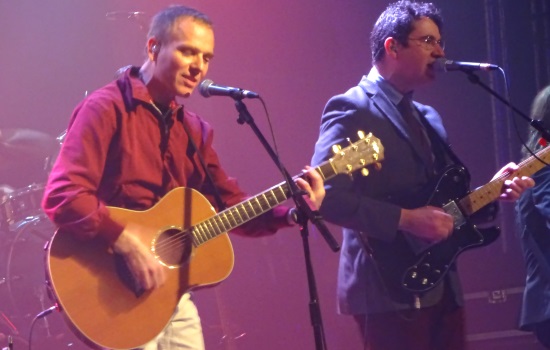 When the band does take the stage, in the expected large numbers, any disappointment about a lack of decent support is soon forgotten. The songs, both new and old, sound great and the near-perfect concert hall is packed to the rafters with happy fans. A casual Stuart Murdoch and a neatly turned out Stevie Jackson are center stage for most of the evening and it is their songs (the bulk by Murdoch) that the audience know by heart. That is except for the brace of songs from the band’s forthcoming album, Girls In Peacetime Want To Dance, including the new single ‘The Party Line’. This song has received some radio play recently and reveals a hitherto unknown 80s Disco influence on the band. It is an oddity in the set, but sounds pretty good nonetheless.

The band are very aware that they have a dedicated following, and the audience have largely been with them for many years, so they don’t insist on only playing songs from their more recent albums. Indeed it is the album they released between 1996 and 2000 (along with a smattering of EP only songs recorded in the same period) that make up the bulk of the set. The Boy With The Arab Strap, now 16 years old, gets the most tracks by my calculation and it is these songs that get the best response from the crowd.

It is the title track from that album which inspires Murdoch to encourage more dancing and stage participation. Several hundred people eagerly accept the invitation and the band disappear from view for the bulk of the song. Astonishingly they keep the song going without error and it is a rather magical moment (a video of this can be found on YouTube here). 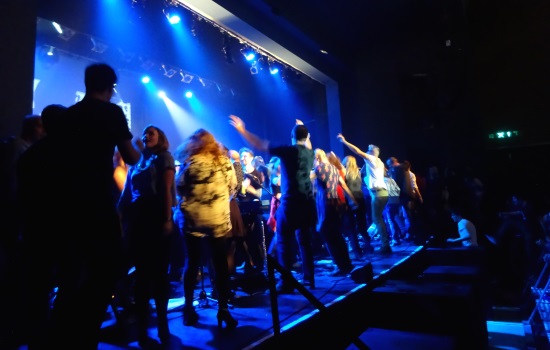 In some ways it is a shame that this song wasn’t saved for the encore, it is one of those moments that is hard to top, even in a gig of this high a quality. However, nobody complains when the band continue for a few more tracks before leaving the stage. The evening of songs has been close to perfect, and nobody could honestly quibble about the choice of songs played, so the clamour for an encore is an unsurprising one.

When the band does return to the stage we are treated to one final song, ‘Sleep The Clock Around’. This is a song that contains the perfect essence of melancholy, melody and positivity that makes them such a unique and wonderful band. They are the only band I’ve ever seen that have left my hands sore, not from applause but from the in-song hand-clapping.

The band release their new album in January 2015 and the full tour starts in the same month taking in New Zealand, Australia, the far east and America before returning to the UK for 14 dates in May.