To celebrate 20 years in the business Wilco have released two bumper sets of music covering their two decades of recording. The first (What’s Your 20? Essential Tracks 1994 – 2014) is 38 tracks giving a pretty good account of their albums to date.  With a back catalogue as good as Wilco’s there will always be arguments about which tracks to include, but this is a pretty excellent selection that stands as the perfect introduction to the band.

More interesting for the seasoned Wilco collector is Alpha Mike Foxtrot, a 77 song collection of non-album tracks from the same period. They aren’t all non-album songs, far from it, but the live versions, demos, compilation tracks, b-sides and covers gives a different view of the same band and offers up a few surprises. 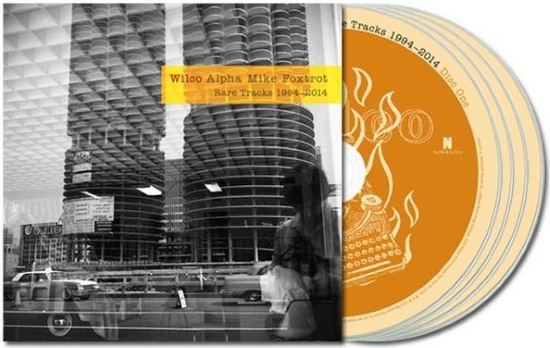 Some slightly grudging reviews have complained that there is nothing much on show here that hasn’t been available before in some form, but for most people these recordings will be a new side of Wilco. The development of the band from the country rock traditionalists of AM through the more sonically challenging Yankee Hotel Foxtrot to the seasoned professionals of their most recent albums is charted in the progression across almost five hours of music.

The cover versions included are all of a high standard, but show the more traditional side of the band, largely songs by American classic rock artists. Bob Dylan, Moby Grape, Steely Dan and Neil Young all get the Wilco treatment. These are lovely additions to the Wilco catalogue but don’t reveal that much about the band.

The demo recordings of album tracks are a much more interesting proposition and my personal favorite songs across the four disc set. In some cases we see the song in a very similar form to the final cut, on other occasions the differences are more marked. ‘Monday’, in a rawer form, seems even more like a Rolling Stones outtake than the final album version and the “king-sized demo” version of ELT is the same pop classic from Summerteeth but sounding like it was recorded for a Cars album.

Other demos show that the band made the right decision with the way they were re-worked for release. ‘Camera’ is a fascinating mess that clearly needed Jim O’Rourke’s hand to become the pop gem ‘Kamera’ on the final album. ‘Hummingbird’ is all clicks and fuzz and scratch,  far cry from the music-hall jazz it became for A Ghost Is Born’.

The live tracks on the album are another reason to listen, this is a great live band and every incarnation sounds brilliant live and you get a real taste of that  here. The only shame is that we don’t get to hear more of the bands recent output  in live versions or demos here. In fact the album seems to gloss over the last few years a little. I’ll never tire of hearing the guitar interplay non the live version ‘Impossible Germany’ but that is already possible on the Kicking Television album.

A few of the songs here that didn’t make the cut for albums are warmly welcomed here. ‘Kicking Television’ (clearly not a favourite recording from  Tweedy’s linear notes) shows just how good Wilco are when they allow themselves to rock out a bit. ‘A Magazine Called Sunset’ is just a great piece of pop music that deserved space on an album release.

Alpha Mike Foxtrot is a wonderful, warts and all, look at one of the truly great American bands. It is a slightly daunting song set, and one that will keep revealing gems for months to come. Anyone who likes Wilco will love it, and it might just be the best place for the uninitiated to start.