Tonight I was torn between staying in and watching some incredibly scintillating TV, you know the usual Saturday numbfest of The Voice, Casualty and The National Lottery Live results or actually going to see some live music, it really is a no brainer, and I opt for the latter. What’s more I’m bouyed by a 4-1victory for Nottingham Forest earlier in the day and the substantial winnings from a scratchcard so I embark upon a Southern Comfort fuelled night of musical shenanigans in Nottingham.

First up is a visit to the Rescue Rooms, to check out two support bands on the current Marmozets tour, so Steak Number Eight come on first. Put it this way, they wouldn’t go down well at a folk club; four dishevelled looking young lads in black, with some nice baseball boot action going on and some de rigeur long hair, discovering the joys of screaming alot and playing simplistic riffs for half an hour as loud as your amp will go before exploding into tiny pieces. 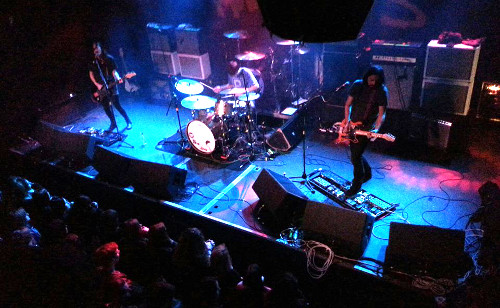 One of the many highlights from Greenman Festival last year was the unplanned discovery of Thought Forms, they blew me away with their trippy guitar sounds and ear bleeding vistas of sonic beauty. So imagine my joy at seeing they were on the bill with The Marmozets as well. The venue DJ had the good taste to be playing Loveless by My Bloody Valentine over the PA between bands, and very appropriate it seemed to. Thought Forms’ Charlie, Deej and Guy are given a measley 30 minutes to impress, it’s not nearly long enough and I question the logic of putting them on a bill like this. It’s a bit like putting Stephen Fry on Channel 4 teen drama Hollyoaks. Thought Forms might be a bit cerebral for a crowd pumped up for some Barnsley punk rock (although to be fair, they told me later that they really dug The Marmozets energy and kick ass fury and were enjoying themselves enormously).

A little after 8pm and Thought Forms go for lift off. Deej, the bearded animated guitarist, entices feedback and mayhem from his big box of effects buttons and pedals, looking every inch the coolest guitarist on the planet. Charlie on the other side of the stage is his female equivalent, but thankfully without the beard, and sandwiched between them is Guy Metcalfe who must be one of the most inventive drummers around. He almost plays with a jazz sensibility and it subverts the songs and makes them more intriguing and original. Due to the time restraints the band squeeze in only six numbers, three of which are from their mighty 2013 ‘Ghost Mountain’ album (now available on re-pressed vinyl) namely, the title track, Landing and Only Hollow, the other numbers included For the Moving Stars, Sound of Violence and Silver Kiss. Where on the album there is light and shade, exploiting to great effect the quiet/loud dynamic, live they attempt to go for the jugular – imagine an explosion in a Sonic Youth factory. Quite what the crowd of post punkers thought of this I’m not sure, but nobody got stabbed and I heard a number of whoops, some of which weren’t by me. Love these guys.

A swift exit, leaving a heaving Marmozets crowd going bonkers I made my slightly lurching way toward a venue called The Maze, it’s small, it’s hot, it’s got more beer, and it’s home to a devoted gang of like minded individuals who’ve been putting on nights under the moniker of ‘Cosmic American’ for over a decade now. Tonight’s draw are Sons of Bill, a fine bunch of five friendly guy next door musicians, three of whom are brothers and who purvey a wonderful line in country tinged rock. They area a little like Midlake, but with more firepower, they really were superb, beautiful harmonies, well crafted tunes and a guitar player in Sam Wilson who really knows his way around a guitar. Their current album is called love and logic, I loved them and logic tells me, you will too.

An entertaining bus ride home involving an argument over an open window, people being strangled and a wife shouting ‘leave him Barry, he’s not worth it!’ all added to a truly memorable night. And it didn’t finish there, at 1:30AM I found myself getting off the late bus and stumbling into a late night pub and within five minutes singing “You’re the one that I want,” from Saturday night fever. I ought to go on The voice. My head hurts.