After ten years of hard slog the surprise success of last year’s Lost in the Dream album must have been a huge vindication for The War on Drugs’s main man Adam Granduciel.

For this listener it’s a great album, only let down by some crude cardboard box drumming and a lazy production, but live, oh my Lord, it’s a different experience entirely. Those demo sounding tunes spring into life and hit you right between the eyes, both euphoric and propulsive they come awake and shine like a cocaine supernova. 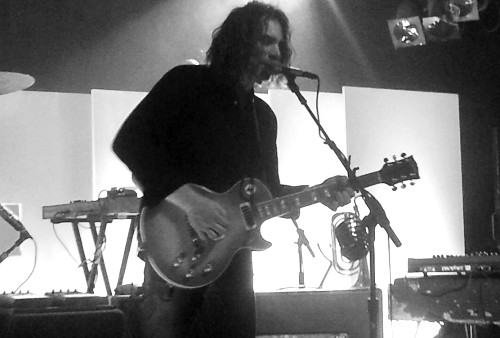 The War on Drugs’s Adam Granduciel

Since 2005 they’ve plied their sonic trade, looking for a niche and searching for a style. The last time I saw them they reminded me of the jingle-jangle of Californian legends The Byrds. On record they’ve veered from gently undulating dream pop to pseudo krautrock as evidenced on their previous album 2011’s Slave Ambient.

The success of Lost in the Dream stems from the fact it has big tunes, something that was not a noticable facet of their earlier albums, which were more focused on atmosphere and experiment. The sold out show tonight proves that people like nothing better than a band from Philadelphia with joyous tunes and a frontman in Adam who is charm personified. ‘You’re a genius’ shouted one enthusiastic punter, Adam just shrugged it off, picked up another guitar, of which there were many and launched into another song.

With only five tickets remaining Nottingham’s Rock City is all but sold out, the band come on at eight thirty and give us a two hour show, with the music fleshed out by five band members, including a wonderful sax player and a drummer with a minimalist Ludwig kit who was precision personified. 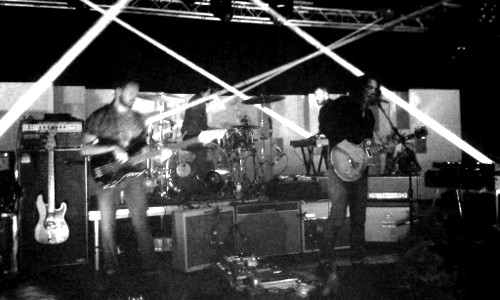 The War on Drugs

As Adam took centre stage we were treated to their defining tracks of 2014, such as Under The Pressure’ with its life affirming, makes you go crazy swirling sound it really hit the spot tonight, interspersed with some jaw dropping guitar playing from Adam it really was a treat. What follows is some of the most fluid, expressive guitar soloing I’ve witnessed for ages, on a variety of guitars he pulls off solo after solo that pitch somewhere between Dinosaur Jr man J Mascis and Tom Verlaine of Television.

Another album highlight, the title track ‘Lost in the Dream’ comes five numbers in. I don’t know what it is about this number and Under The Pressure in particular, perhaps it’s because of the inherent joy embedded in their hearts ,but you can’t help but be carried along on a tidal wave of rock lurve.

Baby Missiles and Come to the City, from Slave Ambient make a welcome addition to the set, as does Arms Like Boulders from the debut album Wagonwheel Blues. But most of the set comprises of the swathes of twisting morphing sounds of Lost in the Dream. There were three numbers for the encore, Suffering, Coming Through and finally the most incredible version of Your Love is Calling my Name that was a psychedelic trip that just grew and grew with guitar FX to die for and a head crunching band in full on mindmelt mode. Just amazingly cool.

*Support came from Amen Dunes, the solo project of Damon McMahon, a guy with a very distinctive voice and a recommended album called ‘Through Donkey Jaw’ on the Sacred Bones label. He was pretty ok and he and his band played semi acoustic trance like songs; repetitive but quite effective and his unusual voice is one I think we’ll be hearing more of in 2015.