Bristol based brother and sister bass and drums duo Annie and Tom Gardiner have been flirting with breakthrough status for around eight years now, gathering plaudits but not the wider audience their music arguably deserves.

Along the way they’ve managed to skip over inevitable The White Stripe comparisons, mainly because they sound nothing like them, and enjoyed more welcome comparisons to Sleater Kinney and Sonic Youth. 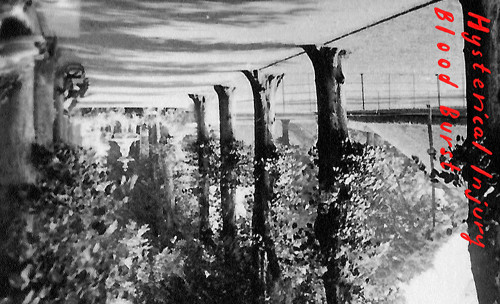 With this latest four track EP from the duo let’s add a couple more comparisons into the mix. For starters early 1980s new wave act Pylon spring to mind, especially on the lead track Under Milk Wood, which has the Athens, Georgia based band’s  similar jerky rhythms, albeit supplemented here  with Annie’s very English sounding folk vocals.

The early 1980s sounds continues with Woken With a Warning, with the sparse urban bass lines of Young Marble Giants a point of reference. Annie also sounds more than a little like YMG’s vocalist Alison Statton here.  This track could stay a YMG homage and still be fine, but then the drums crash in it becomes something even more impressive. Like Under Milk Wood another excellent lead track emerges. It is this track that on repeat listens emerges as the most triumphant.

Ready to Burst and Blood on a Daisy, the other two tracks, reveal themselves as interesting extras to the two main attractions here. Special mention though to the vocals on Ready To Burst, which reminds me a little of the prog-rock disco that Field Music and their various off shoots excel at.

As a collection of four tracks this has it all, two awesome singles, two more more than competent filler tracks and perhaps, dare us West Country music journalists dream, at last a breakthrough release for one of the region’s most interesting acts.