That rare thing nowadays, a seated gig, a respectful attentive audience but sadly no stage diving. Nottingham’s Glee club is mainly a comedy venue but it is also ideal for music due to its beautiful acoustics. That is essential for a bill like tonight’s featuring the stripped back new album Darling Arithmetic from Villagers and the precise vocals of their creative force Conor O’Brien. 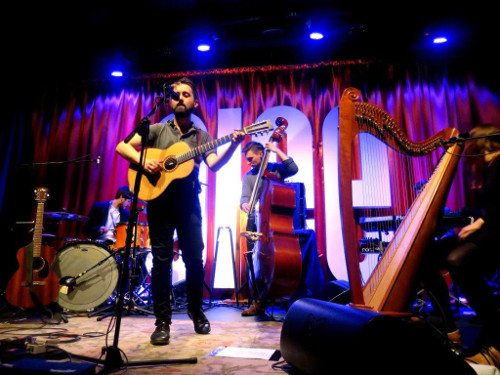 Villagers now have three albums under their belts and they continue to go from strength to strength, consolidating and refining their musical journey, which has already won them a devoted fanbase and one that continues to astonish the attentive listener. Rarely in the history of contemporary music has the delicacy of a perfectly enunciated vocal delivery and backed by exquisitely attractive semi acoustic instrumental passages been so perfectly well executed.

The new album I feel is a polite guest in your house who underneath the calm exterior wants to swear at your Mum. It’s a love album, but also filled with the anger O’Brien feels at times as a gay man facing sexual intolerance in Ireland.

Live O’Brien and band weave hypnotic, hushed tales of love, prejudice and loss, although they can also kick bottom at the drop of a hat. The Waves, from their second album Awayland (2013) for instance was given a lesson it will never forget; all strum and drums to the nth degree. 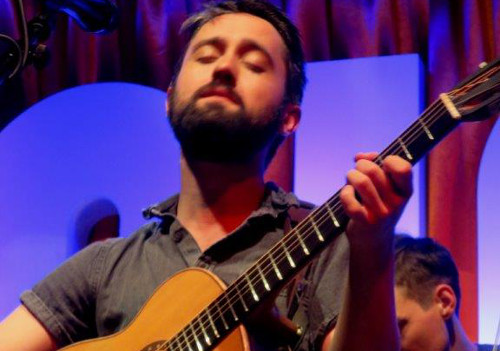 Yet it’s the new songs that take centre stage and impress, the album is played in its entirety, opening somewhat nervously with the short title track and proceeding to mesmerize with Everything I Am Is Yours and No One To Blame, by the time they hit the wonderful So Naive they were cooking on gas. Darling Arithmetic is basically a solo effort but for the live shows Conor has surrounded himself in a sympathetic cocoon of instinctive and frighteningly adept musicians and on Little Bigot and Hot Scary Summer they are playing as one to such a degree the music attains that elusive and spiritually harmonic gestalt that Mike Scott of The Waterboys once described as the Big Music.

For the encore the band depart temporarily as Conor performs Ship of Promises and Becoming a Jackal solo, the audience is spellbound and hanging on every word of these two tracks from Villagers’ 2010 solo album Becoming a Jackal. The band return for a final flourish with a devastatingly honest Pieces, also from their debut album, as well as Courage, the lead track from Darling Arithmetic that closes a most intimate and powerful show. Darling Arithmetic, it’s fab, do the math.

*Support this evening comes from Surrey born Luke Sital Singh, a tall bespectacled skinny guy with an incredible voice a most deft touch with electric and acoustic guitars, even venturing to the  keyboard at one point to deliver a short intense set of depressing songs, his words not mine. All numbers were from his debut The Fire Inside and very good they were too, especially Fail For You.