Shock revelation of the day – Glastonbury is so much more than the BBC coverage and the main Pyramid stage line up. So for all you Kanye West haters with tickets in your hand why not pop over to some of the event’s many and varied small stages.

We’ve had a scan through the full line up, which was released this week, and  have come up with our pick of the small stage acts. As with last year William’s Green continues to impress, especially as it hosts this year’s 25th anniversary of Heavenly Records. We also have some old punks, the best of Somerset’s local bands and one of the best indie bands around at the Leftfield.

We first saw this Liverpool trio supporting Field Music in Bristol three years ago. They play as part of the Heavenly Records contingent, at what has become one of our favourite small venues at the Festival, and are one of the best live acts we have seen. Blending folk, indie and 1960s surf music they are not to be missed.

The deserved winner of this year’s Glastonbury Festival Emerging Talent Competition opens proceedings at the William’s Green stage. Be sure to get up early to see why this teenager won the world’s toughest Battle of the Bands competition.

From France, via California, this stunning live act blend electro-pop and are another in our list to borrow from 1960s surf culture. Their 2013 album Psycho Tropical Berlin was one of our albums of the year for good reason.

Their 2014 album Strange Friend was their best to date and proved why they are one of Scotland’s best bands as they merge rock and electronica effortlessly. Get there early at 5pm to see legendary prog rockers The Bevis Frond beforehand. Both great bookings for William’s Green.

At Indietracks a couple of years ago Martha was the most talked about band there and for good reason. They are injecting some much needed energy into an increasingly introspective UK indie scene. Billy Bragg and co, who curate this stage, certainly know their indie music. An impressive booking.

Leftfield again impresses and has bagged the legendary punk act Buzzcocks. With guitarist Steve Diggle still playing like a 17-year-old on stage and Pete Shelley’s timeless lyrics of love this looks like one not to be missed. 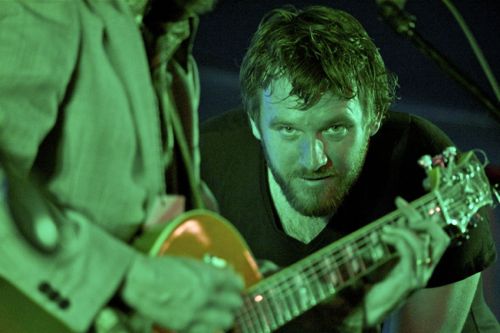 Nick Parker and the False Alarms

Two of Somerset’s best live acts are back again at Glastonbury, which once again is showing a strong commitment to promoting local talent. While Parker and crew focus on bittersweet folk rock  tales of love and life, Flipron will be showcasing their trademark brand of whirly-gig hipster new wave (note: actual genre may not exist).