On perhaps the warmest day of the year what better way to spend a blazing hot Sunday than enjoying a psychedelic breakfast, dinner and teatime in the unlikely environs of Solihull at the Lunar Festival.

Nestled in the West Midlands countryside, amid much greenery and posh houses, our festival’s location of  Tanworth in Arden is famous for only one thing, but it is a GREAT thing, it’s the birthplace of the late Nick Drake. 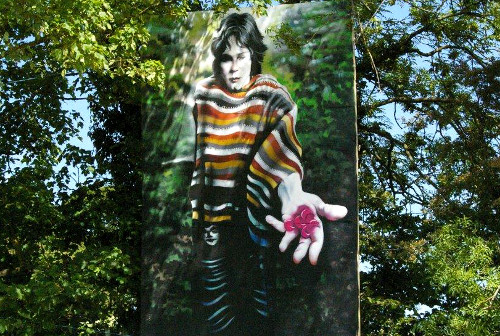 His shadow oversees this little festival. You’ll find a huge painted portrait of him at the top of the site and not a few performers are seen to do covers from his cruelly small catalogue of folk greatness.

A more genteel laid back gathering would be hard to imagine. Lunar Festival is like a country fete on the green but with hippy dancing instead of cricket. At various points throughout the day, time not only seemed to stand still it went backwards and at one point, during Sunspots by Julian Cope, sideways.

After a mildly vile veggie curry we sat down to enjoy Zun Zun Egui  but no sooner had we put our bikinis on  than the crowd were informed they would not be playing and would we ‘please make some noise for Follakzoid‘. Ladies and gentlemen, of all the Chilean rock bands I’ve ever seen,  these were the best, they immediately woke people up with a simple but brutal bass line over which the young guitarist riffed out with lots of delay. 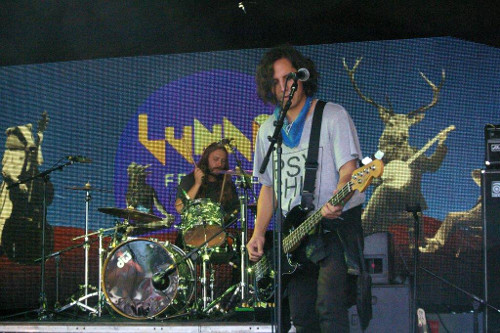 Anyone who digs Krautrock would have turned to you and mouthed the words Can and Neu!, add in a swirling synth and some pummelling, repeated drum patterns and you had a steamroller of riffery knocking on your skull. Their long instrumental passages of groove laden simplicity enveloped a most receptive crowd, who rewarded the band with some of the best trippy dance moves I’ve seen for years.

We caught up with them afterwards in the vinyl tent where we helped them buy some albums, we recommended the second Roxy music album and Thank Christ for the Bomb by The Groundhogs  and did them a massive favour by telling them not to invest in an ELO album, the word ‘shit’ we found is a universal language and they thankfully put it back in the rack.

We specifically chose Sunday to pop by this festival, as two gifted giants of English underground loonery were playing, namely Julian Cope and Robyn Hitchcock. Julian appeared first on the main stage at 5.45pm resplendent in his now familiar military garb, it was great to actually see him play as most of the previous occasions we’ve seen him was as a guest in various literary tents ranting and raving about his new book(s) and being interviewed with great difficulty by confused looking interviewers. 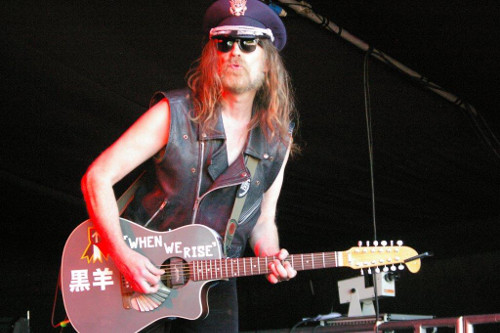 Half an hour before he went on I asked Julian what sort of set we could expect, would it be a greatest (almost) hits set ? New stuff ? A bit of both ?…..he quickly responded with a conspiratorial glint in his eye ‘it will be a SMORGASBOARD’ ….you can’t beat a smorgasboard on a hot afternoon I replied. It was indeed a feast, armed only with a semi- acoustic guitar and some basic flanging pedals he played absolute classics to perfection despite his ramshackle appearance, his voice if anything is better now than it ever was.

He opened with I’m living in the Bunker they found Saddam in, he squeezed in the Greatness and Perfection of Love, Soul Desert and a killer version of Hard Drugs. His between song banter is priceless as he chats about lack of chart success, his former band The Teardrop Explodes, Stonehenge and being “a survivor.”

Cope tells us he’s come to terms with the Teardrops legacy, for many years he’s refused to play their songs but admits he views them now with affection, so we get Culture Bunker from Wilder (1981). After a long ramble about visiting Japan in the wake of his classic album Fried, Sunspots makes a welcome return.

Double Vegetation was superbly executed, Cope airs a new song, Let the Beer Flow Over Me, all about his new found love of beer. After 20 years of being teetotal he has rediscovered his inner brewery and wants this song played at his funeral, amid great gnashings of teeth and much shirt rendering, women throwing themselves on his funeral pyre. He then finishes his set with a brilliant version of Pristine. An absolute star. 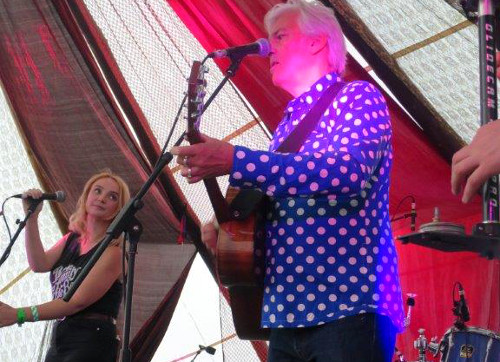 With the chorus to Pristine ringing in our ears we race to the opposite side of the site to sit at the feet of the mighty Robyn Hitchcock, sporting his now trademark dotted shirt. But get this fashion fans, no white spots on black today, no it’s white spots on BLUE.

I put this down to a reflection of his relationship status, he has a new girlfriend Emma who joins him on vocals for half the set, a set which starts with Only the Stones Remain. Wow this is going to be special, indeed the second song was an absolute highlight of my day, he tackled Nick Drake’s Riverman, capturing Nick’s incredibly difficult guitar technique and delivered in  his own uniquely  breathy enunciation of the lyrics. It was so moving and emotionally loaded and he nailed it big time.

Hitchcock followed this with My Wife and my Dead Wife, which I always thought a jolly little throwaway ditty but played today I saw a deeper layer in this fantastic, sad tale of a man deluding himself to such a degree that he is unaware of the entropy enveloping his life.

Like Copey earlier, stage banter is part and parcel of the whole deal, he goes off on one about the size of Crunchies in Australia, God being in the pointy bit of an upside down church steeple and the absence of  Goan fish stalls. Dismal City, documenting the misery loving Brits done in a Kinks style is fabulous, Trams of Old London with Emma is gorgeous, Queen Elvis from 1989 is given a polish. All in all a far too short set of lovely erudite, humourous whimsy that make Robyn a national treasure.

A sizzling day of fine wine, poor curries but absolutely wonderful music and people and as Nick Drake sang on Road from the timeless 1972 Pink moon album…

You can say the sun is shining if you really want to
I can see the moon and it seems so clear
You can take the road that takes you to the stars now
I can take a road that’ll see me through.