The pool of talent in the Swedish folk scene just got deeper. Hoping to follow in the footsteps of the likes of Tallest Man on Earth and First Aid Kit is Stockholm based trio Small Feet. 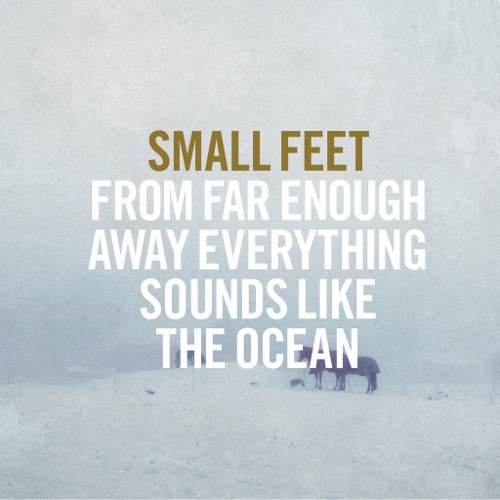 With the epic folk of the Fleet Foxes, a band who inspired First Aid Kit, coupled with the intimacy of Ireland’s Villagers, Small Feet certainly have the sound to match their countrymen and women.

Another strength is singer Simon Stalhamre’s emotional tenor, that warbles in just the right places and is more than a little reminiscent of Neil Young. Fans of Young’s  earlier solo work will find a lot to like here in particular.

Listening to this album it’s quite a surprise to discover it’s a debut. They seem like the finished article already, with their own distinct sound, albeit drawing on influences across folk both old and new.

There’s a lovely chorus on opener Gold, such passion on Rivers and then on All And Everyone there’s a great single albeit odd at times.  I think I caught Stalhamre mention unicorns at one point.

That’s just three tracks in and it continues, The Backwards Falconer bringing more pastoral feel and is amongst the best of the rest. In fact, I haven’t found a duff track yet.

Looking through the press release I can see why this album has such a feel of completeness, of a band fully formed and ready to take to festival stages and large venues. It details how Stalhamre inherited the lease to a 18th century cabin on Sodermalm, an island in central Stokholm that is popular with artists. Here he converted the cabin into a studio and a perfect isolated, creative setting  was created to produce this remarkable debut album.