Heeding the advice of  The Pet Shop Boys we Go West toward beautiful Wales, the land of the chronic vowel syndrome, crap sheep jokes and where drizzle is the default weather setting. To be precise we are off to the Brecon Beacons, where the charming Green Man Festival shelters beneath the green skirted panoramic grandeur of The Black Mountain.

Now celebrating an incredible 13th year, the word is out and this annual freakfest is now one of the must go to festivals on the circuit. As ever, we worry about the weather and the possible consequences of trenchfoot, the withdrawal charges from the onsite cash machines and the possible names for our pub quiz team on the Saturday. 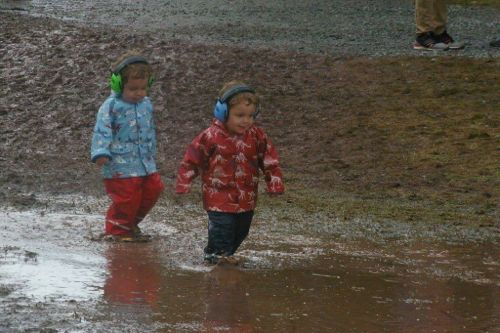 On previous memorable occasions at this festival I’ve seen grown men weep (well me anyway) at startling performances from the likes of Roy Harper, The Archie Bronson Outfit, Flaming Lips, Teeth of theSsea, Josh T Pearson and numerous others. This year’s line up once again boasts some of the most mouth watering and highly anticipated acts of any current festival doing the rounds in 2015.

We could go see some groovy French underground movie, or go for a ride on the big wheel, or go see a trio of Manchester students wearing Fugazi t-shirts playing Bonnie Tyler covers on instruments they’ve made themselves out of some lamb shit, three Pringle tubes and a stolen hairdryer in the Far Out tent, but instead we somewhat predictably go to the beer tasting where Pete Brown is giving an illustrated talk on  the flavours of various beers and which particular band suits that drink, it’s just an intellectual excuse for a piss up  in a big tent basically. 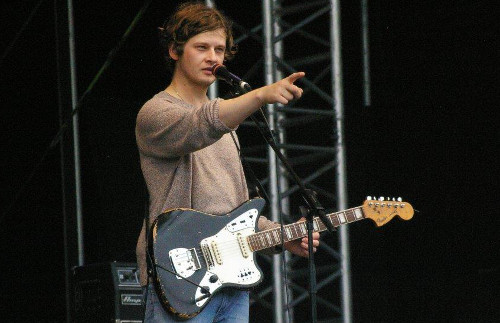 Eventually the sun tentatively pokes it’s head out from behind the clouds to see what all the fuss is about and accompanied by some fine rum we soundtrack our day with ex Coral chap Bill Ryder Jones, who takes us into some dark corners with a set of beguilingly heartfelt songs.

We hardly have time to catch our breath before Villagers mesmerise the crowd with their subtle, captivating musicianship, it’s a lesson in restraint and beauty. The tracks from the new album Darling Arithmetic proving to be every bit as good live as any of their previous offerings.

Over in the Walled Garden a small frail guy turns out to be Tom Robinson, the former post-punk rebel with a brain and possessor of a small back catalogue of singles and albums mainly from the early eighties. More recently he’s the tastefinder general on Radio 6. He and his band played a short greatest hits set, including Martin, Glad to be Gay, the lovely lost classic War Baby and obviously 2 4 6 8 motorway.

Desperately in need of a fix of scrunchy, drugged-up, fucked up British trippyness we  make  an ascent on the slight incline that leads up to the ‘it does what its says on the tin’ Far Out tent. 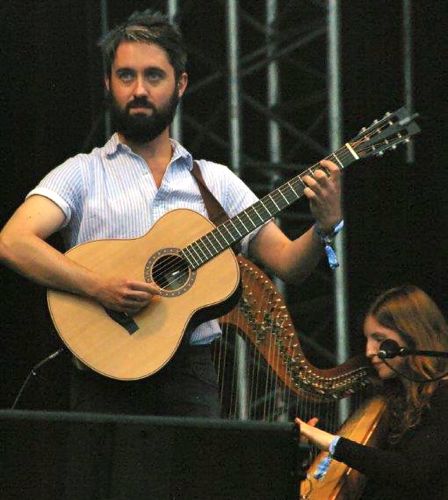 Up first a wonky performance from Leeds finest sons Hookworms, but bettered by far by a slightly underwhelming  (to start with anyway) show from Temples, hesitancy soon gave way to collective euphoria as those tracks on their debut album Sun Structures twitched into life and the monster awoke, leaving this journo duly impressed.

Afterwards a leisurely stroll, presumably on a Welsh ley line brought us to the epicentre of some serious rock action. Strand of Oaks, a four piece, two of whom looked like ex-members of Eels and the other two looked like rejects from both Metallica and Creed, but it just proved that you must never judge a band on appearance alone.

To look at them you might think it was going Iron Maiden bound, fortunately not, instead they played a blinder of a set, full of tough, bluesy riffs, and lovely lead guitar but with really honest lyrics about life, the universe and everything. Vocals courtesy of American Timothy Showalter who looks like  the soundman for  Slayer but was tremendously self effacing , polite and almost tearful at the warmth of the crowd’s response. Its difficult to catagorise them, but if you like rock songs that come from the heart and have potency, deal with  realities and with no reference to dragons or crazy chicks, you’ll love them.

Hot chips for supper, then bed. Only to be kept awake until 4 am by the drum and bass (but mostly bass) shenanigans in the next field.

Still no rain! But my goodness what a great day for discovering new music. Hooton Tennis Club is by anybody’s standards a crap name, a proper name for a band is Amon Duul 2 or Acid Mothers Temple or One Direction. What were they thinking ? But they more than compensate for their shit name with some seriously wobbly tunes that pitch somewhere Pavement and Teenage Fanclub.

Does anybody here remember Teenage Fanclub’s Everything Flows? Hooton Tennis Club kinda like that vibe but ready to head into the ditchat any moment. Their two great closing numbers Jasper and Always Coming Back To You were top notch. 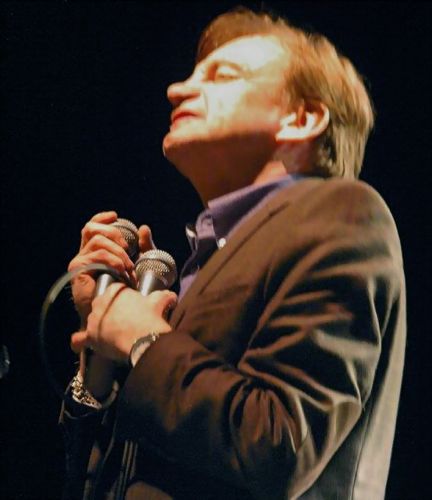 A minor detour over to the talking shop marquee where The Fall’s Mark E Smith was being interviewed by a Mojo magazine writer. It proved to be both hilarious and sad, at various points he went off on one about God, Johnny Vegas and even a conspiracy about crisps. After 30 minutes of inane questions sent in by Mojo readers he was clearly getting restless and he said let’s have some questions from the audience, but before that happened he just casually got up and walked off. More of him later.

As the day drew to a close there was a flurry of limping and note taking, wherever you went great stuff was happening. On the Mountain Stage Charles Bradley turned in an extraordinary set of soul and funk based fun, coming on like some latter day James  Brown, preaching fire and brimstone and extolling the virtues of ‘Lurve’. It’s not an act I ever expected to see at Greenman, a totally off the wall booking and it was killer.

He had the tightest band since Prince was last in town and did a number called Confusion that sounded like a cross between Purple Haze and Ball of Confusion by The Temptations, it was electrifying. Praise the lord and pass the rum. 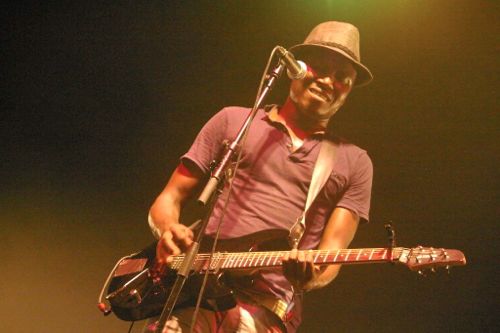 The far out tent then scored a hat trick of quality acts. Songhoy Blues play North African blues with an electro undercurrent and made the audience levitate with happiness. 4,000 people bouncing around a red and yellow tent off their tits on pure unadulterated joy is something once seen, never forgotten.

Then came The Fall, with Mark E Smith shambling on like a geriatric Casper from the greatest film ever made ‘Kes’, a disheveled little bloke screaming his head off into two microphones for an hour. In that time not one word is discernible but the tunes were recognisable courtesy of  the ultra tight band he’s got at the moment. Playing mainly stuff from the new album Sub Lingual Tablet, tracks such as Facebook Troll and Off to Venice With The Girls shifted along nicely, we even got White Lightning and best of all Mr Pharmacist.

It is heartening to see nineties shoegazers Slowdive finally get the recognition they deserve. Reforming in 2014 they have since garnered praise and won new fans of their dreamy, swirling miasma of sound and with Rachel Goswell’s pretty vocals to the fore and Neil Halstead’s treated guitars swooshing around your head at 1am, it’s the best thing ever. Catch the Breeze was a standout as was the final number Golden Hair, with its strobe strafing lightshow, which was not unlike a trip into the stargate in 2001: A Space Odyssey.
At 3am we were found in a bar miming along to Ce La Vie by Bewitched. But that’s our secret ok. So shut it.

Rain made its long overdue appearance on Sunday morning. It was heavy and prolonged, a bit like my trip to the toilet. But it eventually subsided to merely ‘torrential’ (the rain that is) and by early afternoon the sun was coming out again.

Once again Mr Greenman provided much in the way of musical nourishment, ex Boo Radleys’ Martin Carr was cool but the day belonged to Meic Stevens, this unassuming elderly little guy is something of a Welsh legend. At one point he was rubbishly referred to as the ‘Welsh Bob Dylan’, as he was a highly politicised 1960s folk singer, turned on by the likes of Big Bill Broonzy and all those other blues dudes. 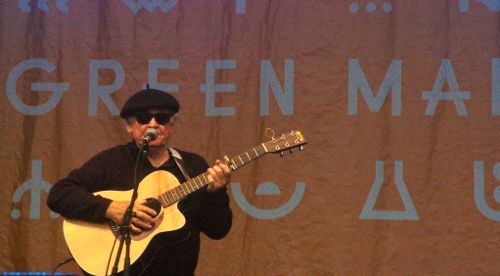 On he came to the stage, now aged 73, looking slightly bemused that anyone in their right mind would ask him to play at Greeman. By the third number I was welling up, under the circumstances his playing  was brilliant and his voice tremendously moving, this despite having treatment for throat cancer recently where the doctors told him that he may never talk again, never mind sing. How wrong they were. He spoke of his times hanging out with John Renbourn, Bert Jansch, Donovan and even Paul Simon. His set was living history with acoustic knobs on.

You can’t go to Greenman without a visit to Einstein’s Garden, a scientific playground for the inquisitive child, curated by a motley crew of university boffins, students and doctors, who each specialise in turning science into ‘interesting’ . 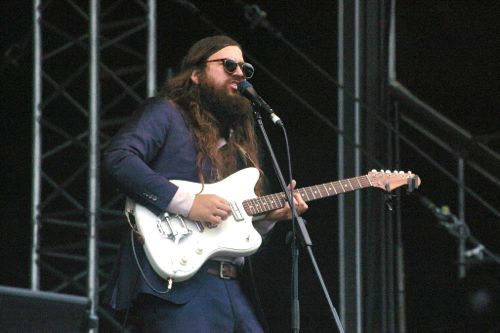 So we popped into The Science in Star Wars  show and how it could provide answers to the Fermi paradox, which is basically the question – where are the aliens?

Thinking Matthew E White would be yet another intense, beardy man straight off the conveyor belt of tortured American artists I was preparing to go see Touch of Evil in the Cinedrome, when he did the best version of Velvet  Underground’s White Light White Heat ever.  Then he got the Deep Throat Choir on stage, all 5,879 of them to do rousing backing.

Last year Public Service Broadcasting played to 300 people in the Walled Garden this year ten times as many came to the Far Out tent to see them as they continue to ride a wave of well deserved popularity. Wigglesworth and co have fleshed out their duo status to ‘band’, and it  works really nicely. They effortlessly weave the old with new, a nice touch was the shitty, home-made Sputnik orbiting satellite that rose unconvincingly during the opening space based toons from their latest offering. 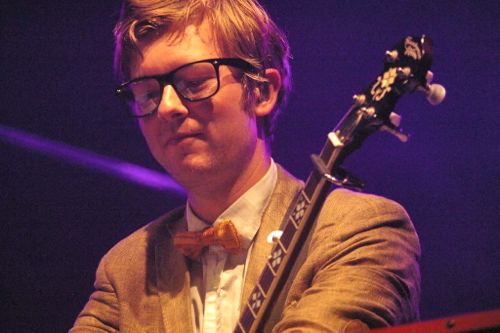 At this point my notes run out, as does my short term memory. A combination of lamb kebab overload, the lack of Savlon and too many beers with funny names took their toll and I collapsed in a babbling heap in the back of an ethnic carbon-free sandal store. When I woke up  I was back home in bed with my little Noddy and dreaming of Charlotte Church dressed as Big Bill Broozy with a tube of Savlon  and what looks like my brain in a petri dish.We must do this again sometime.