Our last album review of a Co-pilgrim release, for 2014’s Plumes, focused on why this talented band from Winchester is failing to get greater attention.

In song writer and frontman Mike Gale they have one of UK music’s best kept secrets, with his bittersweet lyrics merging beautifully with ’60s guitars and melodies. How his tracks are not well known is seemingly a mystery, we gushed. 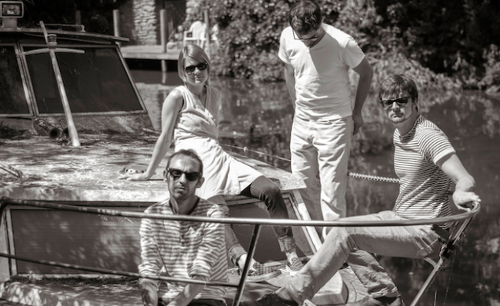 With their latest release, Slows to Go, we are back at the gushing again. The same beautifully arranged guitar pop is evident, but sounds bigger here. The press release says as much too, with Gale keen to point out that this is much more of a full band release, with Andy Reaney’s bass, backing vocals from Claire Bennett and the lap steel and 12 string guitars of Joe Bennett, who as with Plumes is once again producer, all given greater prominence.

For points of reference Gale is a huge Guided by Voices fan and the same sense of indie melodies that Robert Pollard creates year in year out as a solo artist, with GBV and Boston Spaceships, are clear on this release. Teenage Fanclub at their song writing peak on Grand Prix is another, as is REM, particularly their earlier albums, where they too mixed melancholy and joy so well.

From the opening title track this larger sound is evident with its lush vocal harmonies that drift into second track Echo in My Dreams ,where the lap steel washes in and out over the guitar pop.

Speaking of pop You Come Over, You Go and She’s Finally Here have the album’s best melodies, instantly in the brain after just one listen.

Is there a duff track? Not one and even when Gale and co take a break from the lovely guitar pop with the lilting It’s a Blue Moon,  the lap steel’s emotion shines through to make it another standout song in this collection.

Looking across this album and its companions Plumes and A Fairer Sea (2013) this is perhaps the best of the three, the melancholy takes an even bigger backseat to optimism and musically this is the most polished of the lot with Gale’s songs given the sound they deserve.