Bob Mould is in the prime of his career. And brace yourself Husker Du fans, his current band of Jon Wurster on drums and Jason Narducy on bass, is perhaps his best yet.

Patch the Sky is the third in a trio of albums released on Merge Records with this line up and comes at a time when Mould has long since embraced middle age and his sexuality. It’s a far cry from his younger, Husker Du days when his awkward frame struggled to fit into publicity photos. Now he looks like a man at ease with himself, bearded, bald and a darn fine looking chap. 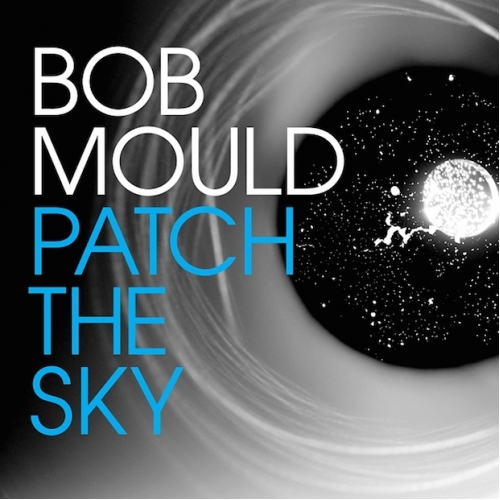 This stability shows in his music too,  with Silver Age in 2012 and Beauty and Ruin from 2014 showcasing two excellent sets of post punk, indie rock at its finest. Live as well the trio are superb, Mould bouncing around stage, stopping only to turn his amp up even louder.

Patch the Sky fits well into this trio’s ethos of presenting fast, powerful and above all catchy songs. There’s a twist though. He’s only human and in recent years he’s endured the all too common heartbreaks of life.

“I withdrew from everyday life. I wrote alone for six months. I love people, but I needed my solitude. The search for my own truth kept me alive. These songs are my salvation.

I’ve had a solid stretch of hard emotional times, and thanks for the condolences in advance. I don’t want to go into the details—more death, relationships ending, life getting shorter—because they’re already in the songs. Just listen and see if you can fit yourself into my stories. The words make you remember. The music makes you forget.”

Voices in My Head is a perfect example of this, with its lyrics of psychological angst coupled with a joyous melody,  especially on the guitar solo. This is among his best compositions in a career that is now in its fourth decade. Then on break up song The End of Things, the sombre subject matter is conveyed with a mosh pit inducing riff and a smart, catchy chorus. “It’s the end of things, the end of everything,” never sounded such fun.

There’s plenty more great melodies. You Say You rolls back the years to those days of Sugar and his later Husker Du work. Another is Hands are Tied, a minute and a half of great grunge-pop.

There are variances on the theme though. Losing Sleep has a little nod to Mould’s dalliance with dance music in recent years and final track Monument, the album’s slowie, is reminiscent of his early solo work such as Black Sheets of Rain and Workbook.

Given Mould has moved from punk to pop, from DJing to producing wrestling shows (yes, really!) his career has rarely been this stable. With tracks like Monument and Losing Sleep there are signs that the indie rock trio days of these three Merge Records releases may be moving on, but I hope not. On this evidence there’s plenty more to come from Mould and his most settled, and perhaps best, band to date.

Bob Mould – Patch the Sky is released on March 25 on Merge Records.