Johnny Rotten nee Lydon, love him or loathe him, even after all these years you still can’t ignore him. From the fiery birth of UK punk in 1976 at the helm of the legendary Sex Pistols, to the leader of the many incarnations of Public Image Limited, he’s a force of nature in human form and a snarling, opinionated epitome of rebellion and dissatisfaction. 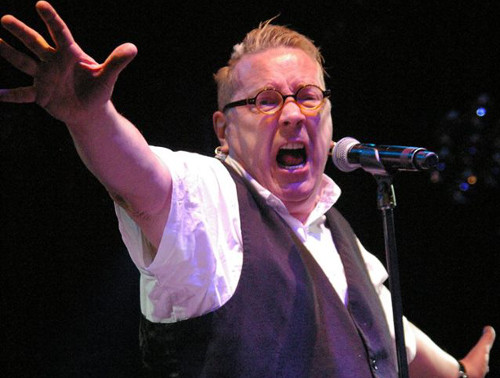 He’s also a controversial Country Life butter advocate with a number of daft adverts back in the day that prompted much criticism of him selling out.

Be honest, if someone offered you enough money to buy a five-bedroomed villa in Portugal for three minutes work, dressed as a twit, would you do it? He took lots of criticism for appearing in these adverts and many accused him of selling out, but it eventually proved to be a minor distraction. He continued to confound fans and critics alike as PIL forged ahead with their distinctively apocalyptic sound. Good Lord, they have even had hit singles.

I needed to write something about this gig, it was going to be a review of a wonderful festival, but I’ve got home and all I can think about is this performance. It was evil, deliriously dangerous, funny and uplifting. An emotional roller coaster in one hour fifteen minutes, complete with middle ear damage.

Ok, it’s Saturday night and PIL are headlining, they are now a traditional four piece with Bruce Smith (The Pop Group and The Slits) on drums, the hulking presence of Scott Firth on bass and on various guitars and sticks that would make Robert Fripp envious Lu Edmonds, once of The Damned. Edmonds looks like a friend of Worzel Gummidge and at one point John introduces him as Jesus Christ. That, my friends, is one tight band.

Opening with the steamrolling head crushing Double Trouble from their latest album What the World Needs Now, they relentlessly pummel the crowd who respond accordingly, by having a fight in the pit. A total surprise comes three numbers in as they do a really old number, one of their classics This is Not a Love Song, followed by thunderous versions of Warrior, I’m not Satisfied, Corporate and most of their new album.

On a lengthy workout of Religion, John recites the mantra ‘more bass, more bass’. The mixing desk respond by turning everything up to eleven, moles were seen emigrating the site and grown men covered their ears as the volume increased to an almost unbearable level, reminiscent of bands like Einstürzende Neubauten, The Fall and Faust. All at one time or another these acts would have also taken great delight in making things uncomfortable for the listener. It was astonishing and went on for quite a while, apparently the moles didn’t return until Sunday morning.

The nearest thing to a traditional rock tune is Rise; it even has a chorus, and one that we all sing-a-long to. The warm May evening sees a devastating run through of Shroom, which contains some excellent swearing and drives the baying crowd to apoplectic distraction.

Lydon is now 60, he still has things to say, has relevance and can still give you earache. He is an annoying enigma, wrapped in a cocoon of moralistic contradictions, but he still has it, by the bucket load as well. He means it maaaaan.