Bari Watts is a superlative guitarist in his own right and the purveyor of much psychedelic heavy rock, principally with his former band, the criminally overlooked Outskirts of infinity.

On this 2015 release he reins in the Hendrix inspired excess and lovingly recreates the Marc Bolan vibe, with an album populated by elves, dragons, wizards and hurdy-gurdy men. 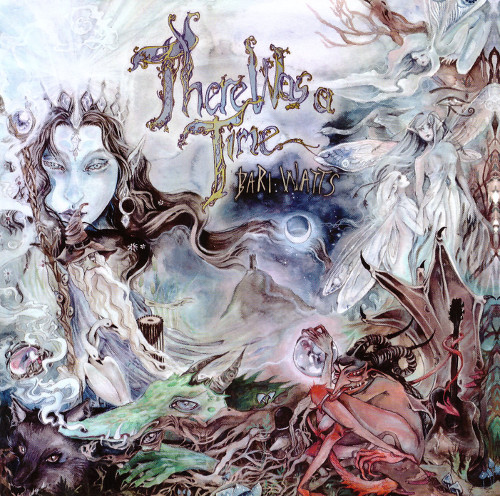 If you are in any way familiar with the work of the late Bolan, with all its attendant imagery and naive poetic license you’ll know that his early work was inhabited with phantasmagorical imaginings and all things fairytale, perhaps it’s true, the drugs were better back then.

Bolan like his contemporary, David Bowie, shone like a sexually ambivalent glitterball in an austere prog-rock landscape. It was as if he was translating The Lord of the Rings into rock ‘n’ roll; with relatively simple riffs and adornments he created musical worlds of enduring beauty and originality.

Watts is obviously enamoured by Bolan’s work and has set about trying to capture those crazy, fantastical hippy-vibes. It could have been a disastrous ambition but he pulls it all off with such consumate ease it’s a bloody joy to behold.

With Woronzow labelmates, Adrian Shaw and Nick Saloman (aka The Bevis Frond) they enter Mordor armed with some hot love and with stars in their (receeding) hair.

On Crystal Pagoda and Karenza (My Lady Love) in particular he sounds so like Bolan you might be forgiven you were listening to some of his late 1960s unreleased demos. Watts has got that tremulous vocal mannerism down to a tee and with sympathtic backing vocals and eastern percussion it’s a glam rock wonder to listen to.

From the laid-back whimsy of Here Be Dragons to the happy clappy Ratskull, to the proto-punk of Demon Love this is so much more than mere copyism. It is homage of the highest order.

An absolute joy……Bang a gong, get it on!