I guess this is what they call intimate, 130 people wrapped up against the bitter cold outside, squeezed into a reverential huddle around a small stage and warmed by flowing ale and some of the most gorgeous tunes I’ve heard for many a month.

Once upon a very different time and place there was a boy girl duo who went by the name of Everything But The Girl. They were utterly sublime and wrote bedsitter soundtracks so laid back as to be invisible. You’ll probably remember Missing with its dance vibe especially. 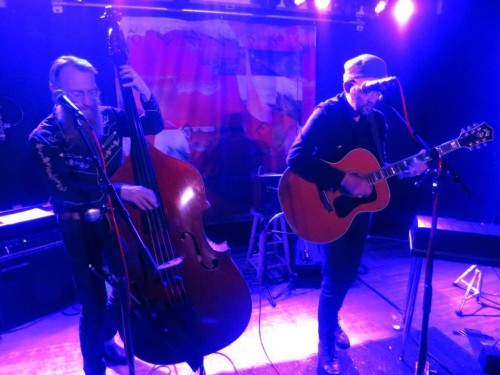 But that was a long time ago. One half of the duo, Tracey Thorn, now scribes for The Guardian and has written her obligatory autobiography. Ben Watt, on the other hand continues to record and tour, hence this little soiree in Nottingham.

But before he takes to the stage, we are graced by the presence of Michele Stodart, the Magic Numbers bassist who is carving a name for herself on the Americana circuit and has two solo albums under her belt now.

Initially she’s a little nervous but soon overcomes any jitters and by her own admission most of the tunes tonight are of the love torn relationship variety from her latest album Pieces.

Tracks Come Back Home, Ain’t No Woman, Will You Wait and Just Anyone Won’t Do are all meticulously executed, with faultless heartbreaking vocals and a deft touch on her guitar.

She really is a superlative artiste. We meet her afterwards and we find gratifyingly that she is as lovely as her songs; a more personable musician you couldn’t find.

Ben Watt is equally as mesmerising. A thoughtful, intense gent in his cap and stubble. He is every inch the troubadour accompanied tonight by the finely bearded Rex on double bass and occasional harmonies.

I knew immediately that we were in for a treat as soon as I heard the slight echo on his guitar, the bass and those lovely vocals it reminded me of the many times I saw the late John Martyn with Danny Thompson. THAT, my friends, is a comparison I don’t often make!

Songs from all stages of his career, from North Marine Drive and 25th December through to the current album Fever Dream, which I consider the highpoint of his songwriting career to date.

Also featured were a few songs from last year’s Hendra, the title track of which Ben described in upsetting detail. He wrote it in response to the death from cancer of his half sister. It was absolutely heartbreaking.

Moving regularly from guitar to keyboards he performed The Levels and a stupendous version of Gradually, New Year of Grace, Spring and Fever Dream.

All this combined for a set permeated with artistry, love and hope.

I was so impressed I bought two of his books as well.