The last time I saw The Dears, inflatable breasted page three girl Jordan was in an indifferent public battle with Gina G for the chance to represent the UK in Eurovision, Prince Charles had announced his intention to marry the very beautiful Specsavers model Camilla Parker Bowling Green and small sweary Eminem was number one with Like Toy Soldiers. 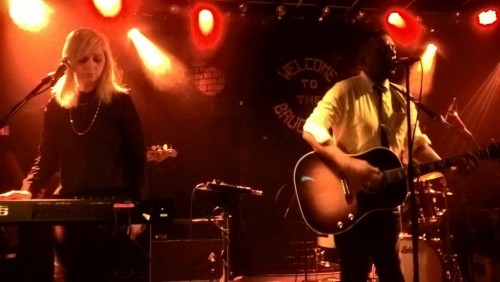 That was what seems like an eternity ago, but was in fact February 2005 to be precise and somehow our paths have long since diverged. They were promoting the No Cities Left album back then, which promised much but criminally failed to garner public attention. Dears one, fickle useless public nil.

What a pleasant surprise then to see that this fine Montreal based ensemble led by husband and wife Murray Lightburn and Natalia Yanchak are still creating epic and grandiose soundscapes.

The Brudenell in Leeds is a strange venue, part wheeltappers and shunters club, part mini 02 Arena. With a pizza wagon in the car park it is the Ritz of the North.

As support bands go Plants and Animals were magnificent. They won everybody over with their twisting, turning urgent popscapes. Coming out of Halifax Nova Scotia via The Dears birthplace Montreal they inhabit a similar musical world, full of restless inventive song structures with subtle melodic undertones. With a focus on tracks from their most recent album, Waltzed in from the Rumbling, their all too brief set was a fiery precursor to tonight’s main course.

Opening with one of the highlights from the new album (Times Infinity Vol 1) The Dears plummet head first into We Lost Everything and I Used To Pray for the Heavens to Fall. It is akin to falling into an abyss of sound, with chiming guitars and the impassioned vocals of Lightburn hypnotising and disorienting the listener into submission. It is a joyous surrender and something they do time and again throughout the evening. As the vocals get more desperate, the guitars get heavier, the mood darkens before exploding, subsiding and emerging triumphant on the other side. 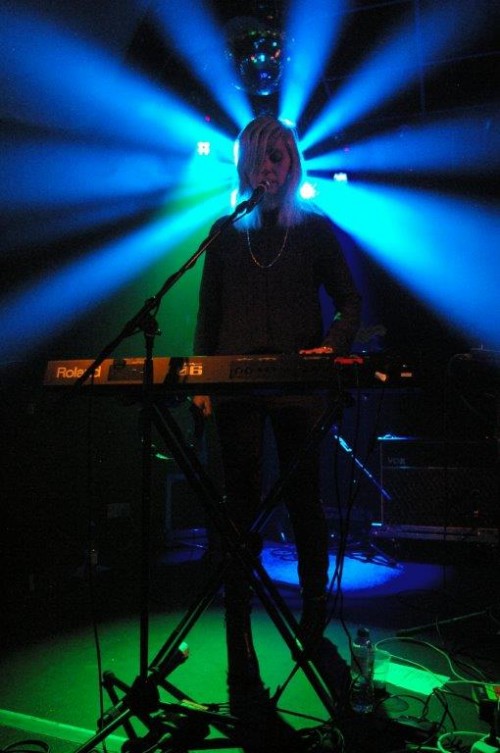 This new album really is a grower and they continue with the haunting Face of Horrors, another wonderful addition to their oeuvre.

At one point Murray is to be found amid the crowd roaring his heart out like a caged rock and roll tiger. There’s no half measures with this guy, who is two parts Otis Redding, one part Kurt Cobain.

Then it is Natalia’s chance to destroy your heart, from behind her trusty Roland keyboard she sings lead on a desolate and pessimistic new number called Onward and Downward. The chorus of which goes as follows ‘in the end we’ll die alone’. Yes, I think they’ve been listening to Joy Division again. But it is delivered so beautifully as to render it heartbreaking.

The songs spew out thick and fast. Whites only party, Hate Then Love, and a tremendous version of There Goes my Outfit from Gang of Losers.

5 chords is resurrected from Degeneration Street and they even stretch back to No Cities Left with Who Are You Defenders of the Universe.

I was trying to pinpoint their sound for the uninitiated, and was going to suggest Pixies meet Elbow. But no, that is bollocks, that is not right. For the life of me I can’t think of a suitable comparison. The Dears are so individual I can’t think of anyone who sounds anything like them.

After the gut wrenching Onward, the band leave the stage and Murray goes all acoustic on us, with A Reading of the Second Part.

This comes as a welcome breather before they go stratospheric with the 22 Death of All the Romance.