Word of mouth from friends and distant cousins from Venus have been going on about Nottingham band You Want Fox for a few months now.

This week I finally got round to seeing them, as part of a four band showcase.

The identities of the other three will have to remain a closely guarded secret as not to embarrass them as You Want Fox usurped their mates with a tremendous, but all too brief set. 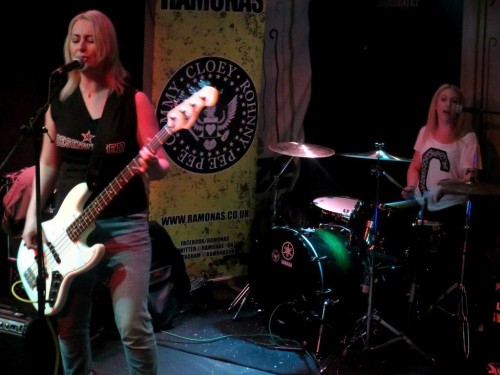 The Maze is a great little venue and nothing like its names suggest. You couldn’t get lost in The Maze even if you tried. Two bars, two bogs, two rooms and that’s it. It’s like a small cottage crossed with a dolls house, but smaller.

You Want Fox are just two people, Colette Elton on drums and vocals and Natalie Caulton on grizzly bass and vocals. For a duo they make one hell of a racket. That is racket in the good sense of the word, meaning to rock ‘n’ roll your cranium into outer space.

With a fuck you attitude and an easy sense of humour they blasted their way through choice cuts from their 2016 debut album You Can’t Sit With Us.

Live they effortlessly fuse girly pop sensibilities with the rifferama ding dong of say Royal Blood or The White Stripes. It works so well, as the polar opposites of their pretty harmonies collide with the feeling your arse is being savaged by a snarling rottweiler.

Bad Girls (Do It Better) opens proceedings. It’s a statement of proper girl power, Ex- Boyfriend, which follows, is just so much fun, especially with the addition of a ‘fuck off’ in the lyric.

Shades of Grey, which is the highlight of their album, is an utter blinder. It’s just so full of irresistible goodness.

They also perform their new single, the catchy Liar, for the first time live.

If I had some money I’d sign them up immediately to my imaginary record label, ring up Butch Vig to produce the next album, get them on at Reading or Leeds Festival and just sit back and wait for the world to catch up.

They really do have the potential to break out of the restrictive small town insular music scene and cross over into super sexy world domination.

The Haylock kiss of death syndrome will now kick in. You watch, they’ll probably split up next week.