Happyness’ 2013 debut Weird Little Birthday was a perfect collection of 1990s US indie rock inspired tracks, that garnered a 9/10 review from this website.

It’s taken four years to release the follow up and since then they have expanded their palette, beyond their staple influence of the US College Rock scene, to take in the 1970s, with a few nods to Big Star, and 1960s psychedelia in particular. There’s also a softer, more relaxed tone in the main to this new collection. 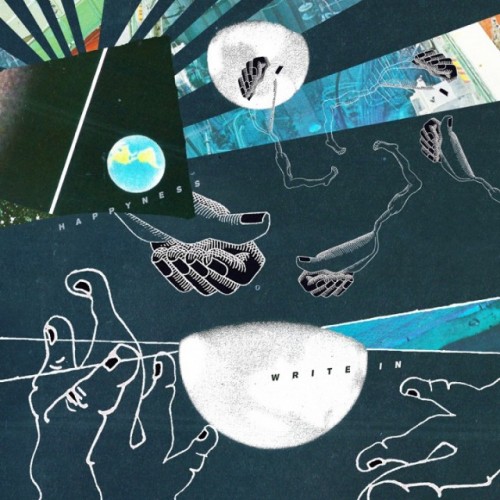 To add to the musical points of reference further, if Weird Little Birthday is akin to Teenage Fanclub’s distorted melodic debut A Catholic Education, this sounds more like Grand Prix.

This is particularly the case on openers Falling Down and The Reel Starts Again (Man as Ostrich), which wouldn’t be out of place on those glorious early 90s Teenage Fanclub albums.

By Through Windows and Uptrend_Style Raids though they’ve dipped further back in time to the 1960s, with this pair of Beatles-esque psychedelic numbers.

They then bask in the glow of the US indie scene one again, with the Dinosaur Jnr inspired Bigger Glass Less Full.

In many ways this is a typical second album, with elements of a stunning debut coupled with signs of a band wanting to go in new directions.

As a result, while all tracks are enjoyable, it feels uneven as it darts across the decades and influences, like a bridge between two albums rather than an end product in its own right.

Write In, which was recorded in their own studio for £500, also lacks the killer hooks of Weird Little Birthday’s best, such as the butt kicking single Its On You

If they continue sticking to the form book, that say The Clash mastered – a killer debut, OK follow up then masterpiece –  then Happyness’ third album will be their London Calling.

For now though this second release offers a reminder of how good there were at the start and glimpses of how much better they are going to be.