It’s taken 21 albums but Robyn Hitchcock has finally gone down the self-titled route for a release, which by happy coincidence just happens to be one of his best in years.

From its purple, cat stroking, cover to its backwards guitars, it is a psychedelic explosion of awesomeness, with oodles of noodles of nods to the late 1960s and early 1970s. 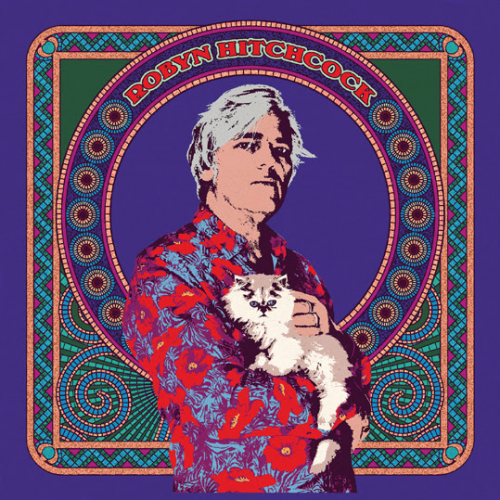 But this is no mere retro throwback album. It sounds modern, full of energy and helped along by a full band and punchy production from Brendan Benson and recorded in his adopted home, Nashville

It sounds fun too, with band mates Grant-Lee Phillips, Pat Sansone, his partner the Australian singer songwriter Emma Swift, and long time collaborator Gillian Welch clearly having a hoot, as is Hitchcock, whose lyrics here once again perfectly blend self-deprecation with hope

“I’m a loser, but I’m walking on air,” he sings on Sayonara Judge, summing this up perfectly.

Other highlights include the twinkling, shiny Mad Shelley’s Letterbox and the country twanged 1970 In Aspic.

His new home’s twang is also featured heavily on I Pray When I’m Drunk, a country, booze-fuelled foot stomper that is helped along by his deliberately, oh-so, British vocals.

Autumn Sunglasses is another highpoint, where Hitchcock channels his inner Pictures of Matchstick Men to serve up a simply glorious slice of psyche pop.

But just singling out a few tracks does it a disservice – the whole album is good and there’s lots more for you to discover yourself.

If you have drifted apart from Hitchcock over the years then this album demands you tuck straight back into one of the UK’s most enduring artists.