The gods of Valhalla spoke to us in a fevered dream. Come to the 15th annual Download Festival they said (formally Monsters of rock) the spiritual home of denim, leather and very loud guitars.

Bring beer, Ginsters pasties and Ibuprofen, they added, and follow signs for the Highway to Hell (it’s just off the A453).

Dr Who has been a bit crap lately so how could we refuse? 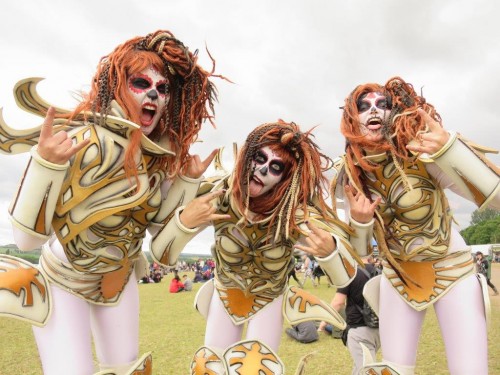 Breakfasting to the good news that May and her Tory shower had gotten a good mauling the previous evening we made ready for our first foray into the arena of METAL.

First to impress at Download Festival were Sabaton who delivered a great set in what was turning out to be a hot sunny afternoon. Yes, I said sunny, surely this can’t be right? There should be rain or at least some annoying drizzle, but no, the sun had indeed got his hat on (and his ear protectors in).

Mastodon increased the noize and ground out a bone crunching mix of progtastic metal at industrial levels of volume, mainly showcasing their new opus Emperor of Sand.

As an aside, the introduction a few years ago of gentlemen’s wee wee blocks is a great help when you’re consuming your bodyweight in ale. But the sight of some enterprising ladies trying to use them because they couldn’t wait to queue for the ladies was quite surreal, some actually managing this feat with varying degrees of damp success.

Meanwhile back on the Download Festival stages, in the Dogtooth tent were God Damn, who invited us to smash into each other with gay abandon. Do try to do this at least once in your life readers as it’s big, clever and character building. Trying to stay vertical as men built slightly larger than Hodor take great delight in trying to kill you was different to say the least, and something I think Suzanne Vega should perhaps encourage on her next tour. 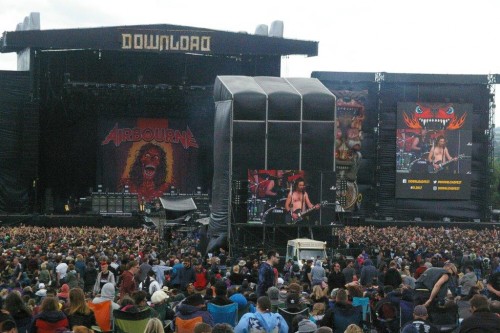 After more beer it was back to the Download Festival main stage for Five Finger Death Punch, a tremendous set that drew a great reception from the horde.

Elsewhere, there was a fellah who does the best pie and chips on Earth situated OVER THERE.

Back to the music and Good Charlotte have a huge following of kids who sing every song, word for word. Still crap though.

More relevant and arse kicking were Prophets of Rage, who at one point paid tribute to their recently fallen comrade Chris Cornell.

To take the weight off our battered feet we watched some wrestling, choreographed fakery that never the less inspires cries of “kill him kill him” from the family oriented audience. We duly picked up some tips there that were to come in handy sooner than we imagined.

Headliners System Of A Down were incredible, despite the sound being a little harsh at first before settling into the comforting recoil of an artillery barrage. The band had the horde going batshit and by now it was hard to resist and we gradually got sucked into the maelstrom.

Accepting an invite from some drunken squaddies ,whilst ignoring the advice given by Bill Bryson about drunk soldiers reviewer Timo found himself at ground-zero mentalist mosh pit central. We never expected to see him alive ever again as he launched into the foray, pausing only to adjust his glasses in his sporran just as Chop Suey started.

We all roared along with its passionate chorus, Timo meanwhile disappeared from sight as his kilt and bollocks went skyward.

If you’ve never been in a mosh pit cauldron its probably safe to say it’s no country for old men, it’s as near as you’ll get to medieval combat as possible without donning chain mail and sporting a warhammer.

It was like a battle in Game of Thrones but with cups of piss instead of flaming arrows. Next year I vow we’re going to Cropedy, it’s safer and dryer. Timo was eventually found by the way in one piece.

Download Festival on the Saturday was by general consensus the weakest day, although Rob Zombie proved to be immense fun. Biffy Clyro though are not headline material, I have to admit we were in a minority on this.

A day of chips, beer, looking at cheap metal related tat on stalls, run by middle aged wife swappers and wannabe Alan Sugars smoking tiny spliffs followed. We also made friends with European heavy metal fans with very little command of the English language (a lot like us really). 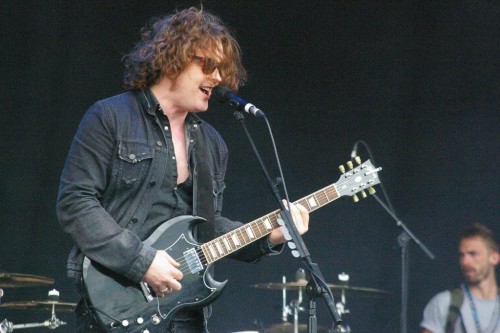 Still no biblical deluge as Sunday rises from the strewn bedclothes of hangover hell, so we meander over to watch the tremendously intense Anathema, who just get better and better.

They are such an underrated band who in the space of ten years have gone from dirty sludge rock to an aero dynamically atmospheric and genuinely moving rock band. How can you not love a band whose first utterance on stage is ‘fuck the Tories’?

It was an afternoon of in your face intensity what with Ministry, Sweden’s Opeth, Clutch and finally the legendary Slayer – who are a force of nature, a tsunami of brutality, a volcano of hate, the Marmite of metal.

What can you say about Steel Panther?

Adult content, spinal tap poodle rock pastiche merchants should cover it. They were so funny, but so not PC, they have one track minds and are all the better for it. Not for the easily offended so we won’t go into graphic detail as some of the ladies might get giddy or faint.

Aerosmith obviously drew the biggest crowd, and considering they are all about three hundred years old still give good rock action. Frontman Steven Tyler now looks like a melted spitting image puppet but the ladeez in the crowd seemed to be quite enamoured with him (or his bank balance) nevertheless.

This was billed as their last ever UK appearance and they went down an absolute storm as they tore through a glittering back catalogue of geriatric Stones copyist rock-lite in a blur of scarves, bangles, painted nails and skin tightening techniques.

Love in an Elevator, Janie’s Got a Gun, a nice nod to their blues influences with a cover of Peter Green’s classic Oh Well, all with Joe Perry firing off some tasty riffage throughout.

Two hours of hits and near misses, Walk this Way, Let the Music do the Talking, Dream On and of course Dude Looks like a Lady. Phew.

This year featured a hugely improved site layout, security personnel with a sense of humour and more inflatable cocks than I care to remember.