It has been at least two months since my last dispatch from the Flaming Lips tour, so this latest review is well overdue!

On that occasion it was a mad night in Manchester, tonight a visit to the not very car friendly Birmingham (whose city motto appears to be ‘road closed’) is called for.

The astrological signs were perfect.

Virgo was in Uranus, there was a lunatic in the Whitehouse and it was the height of the hemorrhoids meteor shower. The conditions were ripe for some psychedelic shenanigans with The Flaming Lips. 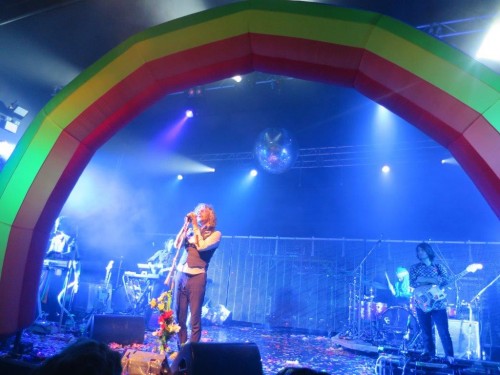 Bearded Jesus lookalike and all round groovy guy, Flaming Lips frontman Wayne Coyne, is treated like the messiah.

“We love you,” shout the faithful as he prepares the band for orbital insertion. The stage is set for another acid pantomime – where’s the evil giant pink robot? He’s behind you!

The keyboard intro for the opening number, Race for the Prize, now surpasses the five minute mark as it builds the tension. We space cadets are ready and primed then BAM! The academy explodes into a multi coloured explosion of light and confetti as this track kicks off the gig in a blitz of ecstatic sing-a-long joy. 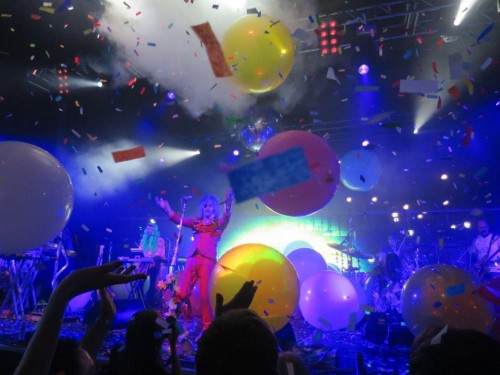 For the next ninety minutes we scream like teenage girls at a Beatles gig. We laugh at the budget unicorn as it makes its wobbly way around the crowd, Wayne astride it laughing and singing.

Wayne gets in the inflatable hamster ball for a cover of Bowies Space Oddity. Two giant eyeballs on legs go-go dance either side of the stage and we sing happy birthday to a girl called May. I then witness J Wilgoose from Public Service Broadcasting hanging off the balcony laughing and shouting down at Coyne on the unicorn.

I look around and a girl who has never seen them before is grinning from ear to ear, a complete stranger kisses me during A Spoonful Weighs A Ton, and How? from the new album reduces me to an air punching crying lunatic. 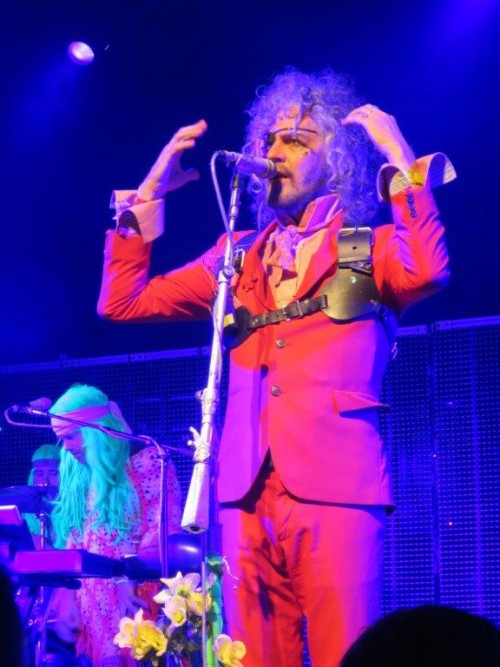 It’s all in a days work for these guys. But every time it’s special and unique – an almost spiritual occasion and the camaraderie at a Flaming Lips gig is like nothing I have ever witnessed.

You will leave with new Facebook friends, a camera full of wonderful memories and a feeling of optimism that verges on the obscene.

Then they do Do You Realize. As the massed happy throng sing this desolate yet beautiful song at the top of their knackered voices the band send out telepathic vibes of universal love to send us on our way. They then disappear back to whatever planet they come from.

The Flaming Lips ‘ support tonight came from Amber Run (don’t worry, not the Home Secretary Amber Rudd), who are a Nottingham band of fine distinction.

They play epic rock tunes that would make Springsteen jealous and have a frontman in Joe Keough who looks like Neil Young circa Tonight’s the Night. He sings like a fucked up angel and is quite the best vocalist I’ve heard for ages.

Their tunes are memorable and the execution riveting.

At one point Joe mentions they were on the point of packing it all in, seeing no money and no girls they contemplated calling it a day but judging by the crowds vociferous and appreciative reaction this should be considered a criminal act. 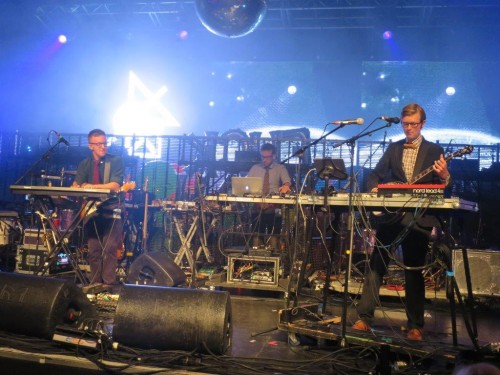 As for Public Service Broadcasting, what can you say about a band who have been into space, piloted a Spitfire climbed a mountain and now descended into a Welsh mine. The band is now fleshed out with an extra guitarist and three guys on brass, one of whom thinks he’s in the James Brown band.

They look like teachers in a 1970s school staff room, All suits and ties, but they really rock. With a simple but effective back projection of images and cracking, albeit difficult to pigeonhole, tunes they are a must see/must hear innovative live experience.

Right, now how do we get back on the M6?