This tenth album from Arizona’s Calexico starts off as a highly impressive alternative rock album. The guitars squeal wonderfully across opener End of the World With You, crunch through Voices in the Field and pound into Bridge to Nowhere before delay pedalling their way into a short instrumental called Spinball. 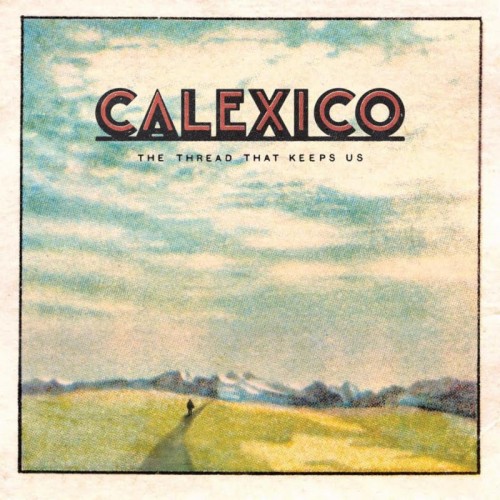 Its an exciting four track run that is full of great choruses and hooks but with a doom laden darkness to keep it extra interesting.

Storms are coming and Calexico are loving every minute of it.

This approach returns later on the album on tracks such as Eyes Wide Awake, but before we get to that Calexico for some inexplicable reason start trialling a range of different styles. It’s almost as if a few random ideas have been soldered into what could have been a truly great alternative rock album.

The most jarring of these tangents is Under the Wheels – a sort of Europop reggae number. There’s more of this pop on Flores y Tamales and Another Space, which although better than Under the Wheels, seem like they should have been on another release. Here they are more like uninvited guests.

There’s some strong slow, acoustic numbers here. These are also good in their own right, especially the excellent The Town and Miss Lorraine and Music Box, but perhaps more suited elsewhere. They just don’t seem to fit on this album.

The conclusion I’ve come to after many listens is that The Thread That Keeps Us ironically lacks a thread to keep it to together. This is sad as each track, except Under the Wheels, is good in its own right. It is just I’m not sure when I’d want to sit down and listen to all 15 tracks in a row.

Perhaps, in an age of streaming and play lists that doesn’t matter anymore. But not being able to listen to Calexico release as one perfectly crafted collection is not a feeling I’m accustomed to. The horn laden Hot Rail and the beautiful melancholy of Carried to Dust continue to attract me to this day from start to finish. The same can’t be said of this interesting but ultimately uneven collection.