Thirty years have passed since Dinosaur Jr got together. Since then they have split up, reformed and are still selling out venues, with this London gig no exception.

Having seen them at the Reading Festival back in the early nineties, it was an interesting contrast, and a reminder of why I had mixed feelings about them last time. 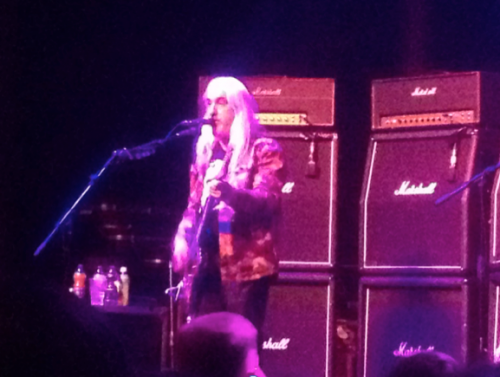 Dinosaur Jr’s lead singer and chief guitar noodler J Mascis is, if possible, even more static that he was back then. He seems an isolated figure onstage, and not helped by the contrast between him and the more exuberant performance of bass player Lou Barlow.

This juxtaposition makes this seem like a solo act with the drums and bass as back up musicians. This is not to underplay the contributions of drummer Murph and Lou to the band’s sound, but the rather odd impression created by the onstage dynamics.

I’m guessing this is unintended rather than planned. J is clearly friends with both support acts and presumably the other guys in the band. His is undeniably, however, a somewhat awkward stage presence.

Ironically, he seemed much more relaxed when strolling on to play guitar on the last song of opening band Easy Action’s set.

Their frontman, hard-faced, angular veteran punk rocker John Brannon, cups the microphone in his hand whilst spitting lyrics at the crowd, mixing hardcore, punk and metal with an industrial edge; they are enthusiastically received by those who arrive in time to catch them.

I catch five of their songs, their final song on which J plays guitar, is the shortest of an excellent, rather intense set and like all of tonight’s bands they are great.

Easy Action are there to remind us of the hardcore punk influence inherent in Dinosaur Jr. Meanwhile, next on the bill,  Stephen McBean from Black Mountain, gives us a taste of J Mascis and co’s  West Coast Country psychedelic roots.

When McBean first came onstage his rather shambolic appearance and lack of introduction made me think he was the roadie tuning up for him. He proved be a far more engaging performer than J and played a solo set using a mixture of backing tapes and looping delay effects to build psychedelic country soundscapes that belie his mild-mannered appearance.

His voice, crystal clear, is youthful, like a garage band from the 1960’s, and some of his songs are stunning. I particularly liked his second number with its Byrds-esque guitars crashing in like broken glass onto the sun-kissed vocal melody.

Dinosaur Jr arrive onstage with the classic Thumb, reassuring their fans that there will be plenty more good songs to come. It’s mid pace melancholy wrought through the band’s virtuoso musicianship, and only held back in my opinion by the venue’s rather indifferent sound (this was something of a bugbear for me).

The vocals weren’t clear enough for any of tonight’s acts, and I would be reluctant to come here to see a band again. Next time I’ll see Dinosaur Jr in a venue with a low ceiling and a solid sound system. That being said, they are still fantastic.

There’s an amusing interview with J on YouTube where a seven-year-old child asks him if he is a “guitar god”. J says, “No”, but based on tonight’s performance it would be pretty difficult to disagree.

J plays guitar like few others, intricate and effortless, it really is something to see. I can’t think of a better guitarist I’ve seen.

Lou Barlow is all hair and beard, the two merging into one shaggy head. Lou wins the Dorian Gray award for looking at least ten years younger than J or Murph. Maybe that’s why they kicked him out back in the 90’s?

Murph, the ever present with J throughout Dinosaur Jr’s history must be the hardest working drummer in show business, rock solid all night without missing a beat. His lack of hair perhaps a sign that there is some stress in slackerdom.

Dinosaur Jr play three of four songs from the new album (all very good), before misfiring the start to “Feel the Pain”, and then going into “Out There”. The crowd go nuts.

And, there is an odd contrast between the Droopy inspired stage persona of J and the hundreds of middle aged men going ape-shit for his music.

As one of those middle-aged men, hearing “Out There” played live makes me feel thirty years younger and want to cry simultaneously. It is a masterpiece and the only song to beat it is the next song, the previously teased, “Feel the Pain”.

It’s wonderfully crafted, with its jarring opening allied to its heartfelt lyrics and swinging bassline and the sheer abandon of the chorus make this song a masterpiece. I glance bemused at the crowd surfing and moshing to my left.

From there the band revisit their back catalogue, with songs from Green Mind, Bug and You’re Living All Over Me, with the latter dominating the selection, particularly the encores.

This, the band’s first album is a little unfamiliar to me, and perhaps a number of their fans, certainly the tracks from Green Mind and Bug, get a better reception from the audience.

Perhaps the band like playing these tracks as they remind them of more innocent times, or perhaps they still have a few copies of it they’d like to shift taking up scant storage space in their houses, and they figure playing tracks off it at their shows may stir their fans to seek out these unsold copies.

If the Greeks have taught us one thing, it is that Guitar Gods are likely to be capricious tricksters toying with mere mortals, so either could be true.

The crowd at the show are an interesting one, there seemingly aren’t that many lively bands going about any more, and whilst I am not tempted to join in, it’s great to see the crowd respond to the band with the heady release of a stag weekend.

Just before the encore, I saw a guy staggering about looking for his mates with four pints of beer in his hands. Thus, tracks like Freak Scene and The Wagon get rapturous receptions.

Before the final encore, Lou Barlow, tongue in cheek presumably asks for requests.

If you shouted out for “Raisans” then you got your wish. I heard a lot of people shouting for “Get Me”, and on that note there weren’t many slow songs, I was rooting for “Not You Again”, but at times you just have to take what the Gods give you.