One of the few positive things to come out of Margaret Thatcher’s policy of mass unemployment, was the formation of Wirral’s finest, Half Man Half Biscuit.

Thirty-four years later, they stroll out onto the stage of the Forum to rapturous applause and launch straight into “Fuckin’ Ell it’s Fred Titmus”. Nigel Blackwell is still fronting the band and playing guitar. He is joined by Neil Crossley (also a founding member) on bass, long standing drummer Carl Henry. New boy Karl Benson completes the line up on guitar. 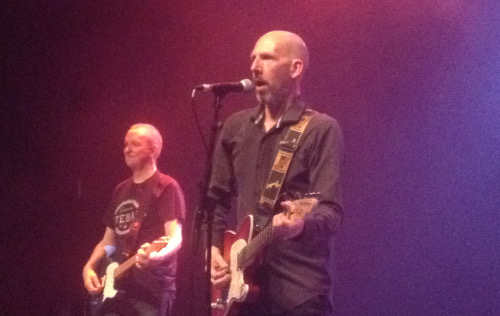 When this song was released, an obsession with obscure celebrities was somewhat outside the mainstream. Now, well look at Love Island (or perhaps don’t) …

After this blast from the past, Half Man Half Biscuit play a song from their latest album, “No one cares about your creative hub so get your fuckin’ hedge cut”. Appropriately enough for a band who are getting well into their fifties and presumably have half an eye on their upcoming free bus passes, “Terminus” is a song about bus journeys and getting old, while the next song, “The evening sun goes down” also alludes to getting old and the paucity of music on offer as you do so.   Sentiments that I and the majority of their forty to fifty something audience can well identify with.

Made famous by turning down a TV appearance on the Tube to watch Tranmere Rovers, Half Man Half Biscuit are the antithesis of the 80’s performers trawling the circuit.

Still producing great albums, it seems unlikely that Jo Cox will be playing them at her 80’s night at the same venue the following week. Next up comes “Running Order Squabble Fest”, one of a number of songs this evening that lampoon the absurdities and hypocrisies of every music scene ever. “Look Dad No Tunes” is perhaps the highlight tonight of this vein with its skewering of the middle-class angst that powered grunge.

Over the course of the evening, Half Man Half Biscuit run through a sizeable portion of their not inconsiderable back catalogue and about half of their latest offering. Resolutely anti-commercial, they have produced thirteen albums in their thirty-year career (they took a few years off in the late 80’s to avoid fame and success), not bad going for a bunch of dole bludgers from Birkenhead. Talking of which, one of tonight’s highlights is “A Lilac Harry Quinn” containing the immortal line “if God had meant for us to work, then I’m sure he would have given us jobs.”

One of the original C86 bands, Half Man Half Biscuit’s set is dominated by songs that peel back the fancy wrapping of modern life to reveal the shoddy goods beneath their façade.   Indeed they make cynicism something of a virtue as they contemplate the vagaries of modern life in songs such as “National Shite Day” and “Every Time A Bell Rings”, railing against the axis of evil that is “Primark FM”, Bus replacement services and TV movies.

Although a band of the 80’s their roots are still in the punk of the 70’s. There is something reminiscent of the Ramones in the succession of acerbic three minute tunes they play.

Additionally, their subversion of folk music, on songs such as “Paintball’s Coming Home”, gives their music a traditional feel that jars pleasantly with the modernity of their lyrics. Indeed, despite their seventies roots, the playlist they pluck tonight’s songs from is like a cultural guide to the British Isles over the last thirty years. The irony of the couple ridiculed in “Paintball’s coming home” for knowing “where things are in B and Q”, and naming their Dog “Prince” (“The one called Sheba died”, is reminiscent of the intro to Trainspotting, and what  Half Man Half Biscuit do so well is tap into the great groundswell of scepticism lurking beneath the surface of this rather cynical sceptered isle.

The irony inherent in their songs and their pop culture references, make them easy to dismiss as a novelty band. But songs such as “Fix it so she dreams of me” are tinged with both sadness and a beauty that prevents them being mixed up with Carter the Unstoppable Sex Machine or Weird Al Yankovic.

But  let’s not spend too long in Pseud’s Corner.

At their heart Half Man Half Biscuit is a great rock ’n’ roll band. This is something not lost on me as I spend the last ten songs po-go-ing away like it’s 1991 again. They leave to last one of my favourites, “Everything’s AOR”. With its off beat guitars and its lyrics berating swivel chairs and business acumen, it just goes to show that not too much has changed in the intervening years.