The Lovely Eggs are husband and wife duo David Blackwell (drums, vocals, home made box of wires with a bright light screwed onto it) and Holly Ross (guitars, vocals and orange tights).

The redtops would probably describe them as quirky. They play ramshackle, coming apart at the seams punk-rock that goes blam blam blam…Blam! 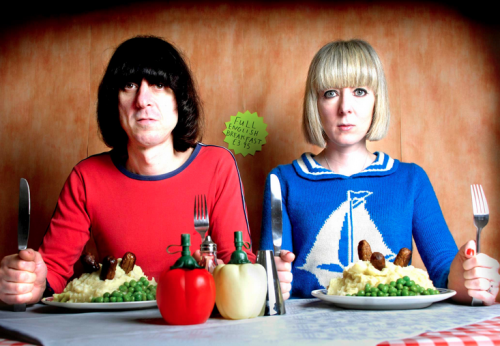 Tonight’s mayhem happens inside a sold-out Brudenell, one of our favourite venues. I mean how can you not love a club in which you hear Can, Neu ! The Sleaford Mods and The Velvet Underground while you’re waiting to get served?

Holly takes to the stage clad in the aforementioned orange tights, probably the same ones she wore at the Greenman Festival in August (I do hope she’s changed them ).

She’s gobby and excitable, with a guitar style best described as bonkers. They’re playing on their own turf tonight and the crowd love it.

The Lovely Eggs are very much a one trick pony, albeit it a muscular, slightly demented Lancashire pit pony. And the trick is second rate Paul Daniels. No matter though, as they are adored by the faithful, who sing along vociferously to some great song titles such as I Like Birds But I Like Other Animals Too, Fuck It and the sublime People Are Twats.

We even get some cooking tips for onion rings. There’s also a minor crowd altercation with an over excited bouncer and a some drunk lads. This is swiftly tackled with humour and some Northern common sense.

Not a bad night. A bit one dimensional but that might have been the (very) pale ale.

Special shout out to Rob Auton who hails from York who’s doing some daft stand up on the forthcoming The Lovely Eggs dates. Now he is quirky, but in a good way.