The first time I listened to the Accidental Falls, Eyelid’s 3rd full album, I wasn’t immediately taken. Their first two grabbed me immediately, and have remained firm favourites, but this one felt different. I’m lucky enough to get access to some albums early, and my first listens were just before Christmas, and I put the album to one side knowing I had until February to make my critical assessment.

In January I started to listen to the album again, and after a couple more plays it clicked. Really clicked. It made perfect sense (if an album can make sense) and I went from lack of surety to certainty, this was a great album, as good as the first two. So, it seems, Eyelids have delivered their first “grower”. 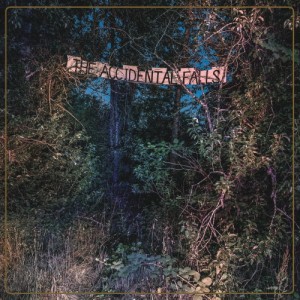 The album differs from their previous releases in that the lyrics were written by Tim Buckley collaborator Larry Beckett, with the band providing the musical contributions. The effect of this is that the album sounds more 60s and 70s influenced than even their previous recordings. Not in a tired or pastiche way, more in a general mood and tone.

Opener ‘Dream’ is a beautiful languid piece built around a simple but captivating guitar line. Eyelids have always been built around the intricate guitar interplay and it is clear from song one that The Accidental Falls isn’t looking to deviate from that pattern.

The band can also rock pretty well and the title track ups the volume nicely. It is another great piece of melody with pounding drums and some big guitars.

The album has a great balance throughout of quiet tunes and more rocking numbers that you know will sound even better live. Special mention has to go to ‘Found At The Scene Of A Rendezvous That Failed’, simply one of the best songs on the album. It is probably the most self-consciously retro production on the album (and is a previously unrecorded Buckley and Beckett composition), you wouldn’t be at all surprised if you had heard the song on a lost Beatles demo. Mermaid Blues also deserves a mention with one of the nicest guitar lines you’ll likely hear all year.

I asked Eyelid’s own Chris Slusarenko whether producing an album based on someone else’s lyrics had changed how they approached the record.

“I think we were not really sure what would happen once we sat down with Larry’s lyrics.  That first creative get together with Larry was maybe a bit sheepish on our end.  He’s a total legend and I think we thought maybe we’d get a really special 7″ or EP out of it.  And since writing our own lyrics is such an important part of what we do I think we weren’t sure how the process would work.  But I went home with his giant stack of lyrics (ranging from the 60s to now) and wrote River.   John went home that same night and wrote insomnia.  We were off to the races really.  I sounded like we wrote those lyrics–it came from inside us.  After that the process ranged from sending songs for Larry to write lyrics to (At Sea, Dream) to a Goethe translation (The Accidental Falls–which is the most rocking Goethe translation of all time!  ha!) to one song that Larry  & Tim Buckley wrote together in 1966 (Found At The Scene…).   We just became it but really it feels like Eyelids.  I guess that’s why Larry was so good with Tim Buckley (and other artists).  You can’t even imagine that Tim didn’t write the lyrics because they were SO him!  I think the same can be said for Eyelids.  It just feels like us and the songs melted through us.”

The album definitely sounds different to previous Eyelids recordings, the response to the lyrics must have made a difference, but it loses none of the melodic brilliance that has made the band a Neon Filler favourite since they formed.

It is also nice to see the album getting press (and very favourable press) this side of the Atlantic. Hopefully some sales will follow, and we’ll see the band doing a UK tour later this year.

The album gets a valentine’s day release and is highly recommended for fans of the band or anyone looking for a great guitar pop album.