Half-finished album? EP? Mini-album? Call it what you will it, but Mesopotamia deserves its own place in the history of The B-52’s album releases.

It was planned as the band’s third full album with David Byrne at the helm no less. He seemed the right fit for a band that was regularly on the same touring circuit and bill as Talking Heads. They knew and respected Byrne and vice-versa.

But it didn’t quite go to plan. Byrne was also recording The Catherine Wheel, which he worked on by day, while recording with the B-52’s at night.

This schedule can’t have been good for anyone involved. 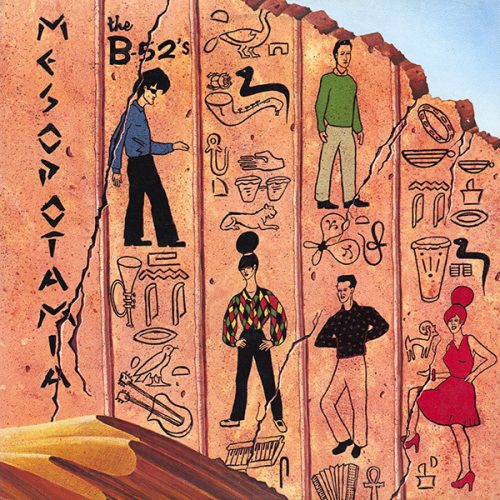 Whether lack of sleep or not quite understanding The B-52’s, Byrne’s mix of the album was not what the band were after. Too flat, too sad in places. Perhaps he was half asleep?

As a result, it was cut short and released as a six track collection, with three of four abandoned songs later to resurface in the far more commercially savvy next album Whammy, but more of that tomorrow.

Island didn’t help either, shunning the band’s choices of more upbeat tracks and instead going for filler songs.

Across the six tracks here, half are good and half are a misstep. Loveland, with Cindy Wilson on vocals, followed by Deep Sleep, with Kate Pierson taking turns behind the mic, are as lacklustre an opening two tracks as you can get.

It picks up significantly with the title track, with Fred Schneider’s much needed enthusiasm making it a real highlight. Cake is a track I’ve warmed to, but the mix feels too flat for me. It ends on a high though with Throw That Beat in the Garbage Can and this mini-album’s best track Nip It in the Bud. Cindy is on fine form here.

The tracks that later emerge on Whammy are all perfect for that release. I’m glad they were left off Mesopotamia and away from Byrne’s tired controls.

You may love some of the tracks I haven’t warmed to and hate the ones I like, but time and again it is Mesopotamia and Nip it in the Bud that I come back to from this.

Next week, a drum machine and an album with one of, if not our favourite tracks by the band. It’ll help you find the essence from within!