Here’s the sad part. Not the next B-52’s album – Bouncing off the Satellites – that we are focusing on over recent weeks.  That’s full of excellent tracks. It’s the story behind it.

Guitarist Ricky Wilson tragically died after the album was completed and prior to its release.

He was one of the many young brilliant men that succumbed to Aids during the 1980s. His guitar playing and song writing were becoming more assured. He had already invented his own tuning and riffed his way through the previous decade or so. But it was to be no more.

Bouncing off the Satellites was in the can and it is full of commercially pop savvy numbers, including upbeat tracks moving into the realms of dance and club music with Girl from Impanema Goes to Greenland, Summer of Love and the ridiculously silly Wig. 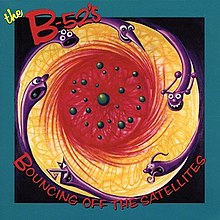 Tony Mansfield was on production duties for this one. That may explain why it sounds so radio friendly for a mid to late 80s audience. His credits include Aha’s Hunting High and Low.

But with the band too shocked to tour and promotional appearances limited it failed to make an impact on the charts or the media. According to Pierson, Wilson even kept his illness secret from his band mates. They pretty much disappeared as a band, with Ricky’s sister Cindy particularly affected. They would not come back together for another two years.

This was the first B-52’s album I bought when it came out and it will always be tinged with sadness due to Wilson’s death.

It’s almost as if the songs become sadder knowing about his death. But there are also some beautiful ballads on here, which are the ones I still listen to most regularly.

Ain’t it a Shame is a beautifully sad Cindy Wilson number, co-written with her brother and drummer Keith Strickland.

Coincidentally another of my other favourites is She Brakes for Rainbows, also featuring Strickland on writing duties, this time with just Ricky.

The band will need Strickland’s increasingly strong ear for a good tune when they convene again for their next release.

Elsewhere on the album, Theme for a Nude Beach is stupid but strong and I have a soft spot for Detour Thru Your Mind.

The fillers are from Pierson and Schneider respectively, who supplied solo tracks they’d been working on. Of the two Pierson’s Housework is the best. Schneider’s Juicy Jungle feels a little out of place – too solo.

There is some strong music here and makes me wonder what would have become of the band if Ricky was still alive.

**Cindy and her son Nolan recently shared this wonderful clip of them playing She Brakes For Rainbows in her living room from last year. This is one of the great comments that sums up her singing style – “I love the place Cindy goes to as she sings”. I think she always thinks of Ricky when she sings this.**