The next two albums are the band’s most well known as they completed their transition from small town New Wave trailblazers to mainstream success.

We rejoin The B-52’s after a hiatus following the loss of their band mate and guitarist Ricky Wilson.

His Aids related death in 1986 was devastating for the band, especially his sister Cindy. Ricky had kept his illness largely a secret from the band.
During the following two years they moved from New York City, with Cindy and drummer Keith Strickland becoming neighbours upstate in Woodstock.

After a couple of years, where making music took a back seat, it was Strickland who got the band back. Turns out he’d been honing his musical abilities and had a bunch of music to present to the band.

Keith told Billboard recently: “I wrote the instrumental portion of the songs. I would record a multi-track of music, and Kate, Fred and Cindy would improvise over it, and together, we would arrange their lyrics and melodies with the music.”

The songs are good, musically strong and lyrically the band were more mature, with self-reflection now part of their repertoireThis maturity was significantly aided by the recruitment of Nile Rodgers and Don Was, who produced around half the album each.

These veteran hit makers helped the band craft Cosmic Thing into The B-52s most commercially successful album to date.

The Bs had finally gone mainstream, something they’d hinted at on the previous two albums. For some, those who remember the sci-fi twang and bee hives of their first two albums, it was a turn off. Not for this B-52s fan though.Yes there’s some silly party songs. The title track and Wedding reception favourite Love Shack. But they were undeniable hits.

It’s elsewhere where sceptics will miss out. Deadbeat Club looks back at their own origins as a band – oddballs in a Southern town.

Junebug is wonderful, with Cindy and Kate’s vocals on top form. There’s more too, with Roam my favourite. What a single!
As a complete 10 track collection its great. Yes mainstream. Yes mature. But the songs are earworm catchy and this marks a welcome return for the band.

Also make sure you check out Follow Your Bliss by the way, with its tribute to Ricky Wilson and his guitar.

Cosmic Thing was a commercial and critical success, with small venues becoming stadiums on tour and Strickland now officially moved from drums to guitar live.
Platinum status was secured within a decade in the UK and in the US it has sold over four million copies. Globally it’s a five million selling album.

We resume our album-by-album The B-52’s retrospective with a look at Good Stuff, their 1992 follow up to the huge success of Cosmic Thing.

This was at a time when singer Cindy Wilson decided to take a break from the band and they were carrying on as trio of Fred Schneider, Keith Strickland and Kate Pierson.

Live Julee Cruise replaced Cindy Wilson. A fine stand in, but there’s only one Cindy Wilson with her unique southern states emotional style of singing. It is their only album not to feature Cindy.

Despite their obvious mainstream appeal, they were still being pigeonholed as ‘New Wave’ and ‘alternative’. Incidentally, Good Stuff was nominated for a best alternative album Grammy – eventually losing out to Tom Waits’ Bone Machine. 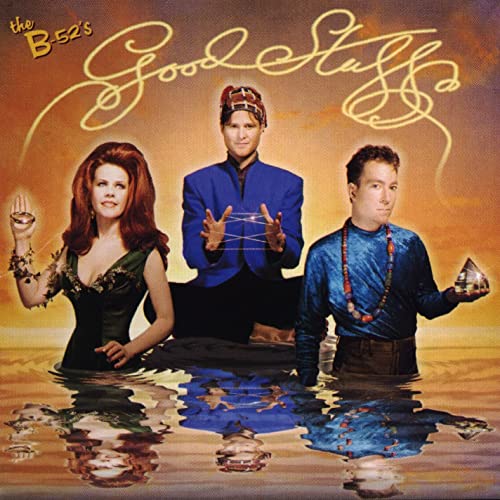 Cindy, Kate and Fred work perfectly as vocalists. But take one away and its not the same. Therein lies the problem with Good Stuff.

Tell It Live It T-I-Is is bland rock and roll, although Kate’s vocals are great. Hot Pants Explosion is just plain stupid, rather than cool-stupid.

As with their previous album Nile Rodgers and Don Was once again share half the tracks each and the title track is perfect for one of their own albums but falls flat here.

There’s a bit of politics (to be said in a Ben Elton 80s voice) here referencing their own activism, on gay rights, Aids awareness and the environment. Revolution Earth sums this up and ends up being the highlight. Great melody and Pierson again excels. How good would this have been with Cindy too!?

The same can be said of Dreamland. It clocks in at more than seven minutes and sounds great, featuring Strickland’s increasing influences of Buddhism and meditation. Turns out his was a hippy all along. Also, Pierson carries its trance like funk along well. Once again, with Cindy involved this could have been one of The B-52’s career highlights.

For Pierson fans this album is a must. Vision of a Kiss features another strong  Kate performance, as does Breezin’.

There’s a nod to their earlier days with live favourite Is That You Mo Dean? given a run out. Ends up a bit of a filler track though.

Despite some less than stellar offerings, there’s a lot to like here, some great songs and its got a nice laid back feel to it too.

But without Cindy Wilson there’s a vital cog to their machine missing.