How to start a gig: come on stage and admit to your audience that you’re feeling a little loopy after eating burgers and getting thrown out of Claire’s Accessories. And so the stage is set for an intimate evening with Josh Tillman’s alter ego, Father John Misty.

It’s billed as a posh in-store, with the refined surroundings and fabulous acoustics of St George’s, standing in for Rough Trade Bristol, and is the first of two performances this evening. 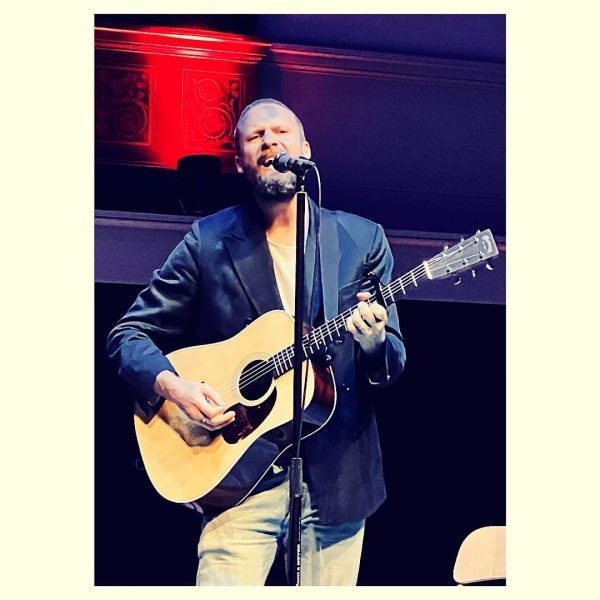 Given the constraints of having to turn tables so quickly, and Tillman’s ‘loopiness’, one might be forgiven for having low expectations of this 5.30 show. Happily, these were immediately assuaged by a persuasive Josh, who seems to have spent lockdown honing his lounge act and stand-up skills.

The new album (Chloe and the Next 20th Century) has more than a hint of 1950’s Vegas about it, albeit a Vegas that doesn’t shy away from the trademark sardonic Misty layers, rather than just surface gloss.

There are a handful of these new songs peppered through his twelve song set tonight, the strongest by far being Q4, which he finishes by giving us a full breakdown of the story behind it. This description almost begs for a Powerpoint presentation and laser pointer, and gives the impression that Tillman would be as comfortable in front of a board room of movers and shakers as he is here-casually dressed, and a sense of loucheness about him.

He’s not in full-on Father John Misty mode tonight, no sharp suits or knee drops. This only serves to give him a vulnerability sometimes missing from bigger shows.

He engages with his audience, asking questions, and giving a shout-out to the ever-present Bristol-based Big Jeff.

There are crowd-pleasers: Mr Tillman, and a soft Chateau Lobby #4, alongside requested versions of Growing Old On Magic Mountain, Bored In The USA and Holy Shit, which he seems more than happy to indulge.

Claude Schwartz is an excellent accompanist on piano, adding beautiful baroque trills (and humming) to the aforementioned Q4, and raising the odd eyebrow to Tillman’s extended tuning up. Sure, we still get hints of the over-medicated, unreliable (but mostly good fun) old days, but in all, this was an impressive performance, and one which firmly re-frames Father John Misty as a latter-day torch singer.

Words and Pictures by Sam Gray