This is the story of two festivals.

One is an imaginary festival, full of the best and worst of all worlds; a land where Paul McCartney plays all the hits. Where every rumoured guest star plays at every rumoured secret set, and where the long drops regularly spew their contents down the valley to cake pristine wellies and trainers.

In the run-up to this year’s belated festival, social media would have you believe that this was in store for us all. And that your #glasto experience wouldn’t be complete without the right charger, trolley or sequinned playsuit.

The real festival can be anything you want it to be (as long as you’re expecting to hear In Spite Of All The Danger as well as Hey Jude). You can read up on it all you want ahead of time, but nothing will quite prepare you for the first time you see the site; from a distance it’s breath-taking, once in almost overwhelming. From years of experience, it’s best to just get stuck in.

Armed with a trusty can of Thatcher’s and the @secretglasto Twitter feed, the Wednesday evening opened up with a secret set from Billy Bragg in the Field of Avalon. Say what you want about Bragg (and plenty do), he can corral his audience into a good singalong. He incorporated his recent online travails into an updated version of Sexuality, and had enthusiastic dance accompaniment from his two small grandchildren throughout his set.

Following this up with a set from locals Seize The Day and viewing the opening fireworks from Strummerville ensured that we ticked a few of the Glasto bingo boxes that first night.

Thursday saw us avoiding the crowds at William’s Green who were there to see ‘a secret set from a pyramid stage sized band’. Instead, Pigs Pigs Pigs Pigs Pigs Pigs Pigs were the anti-Bastille over at the Truth Stage. In both cases, you know what you’re going to get, but undoubtedly there’s more excitement in a Pigs x7 moshpit, despite sound issues. 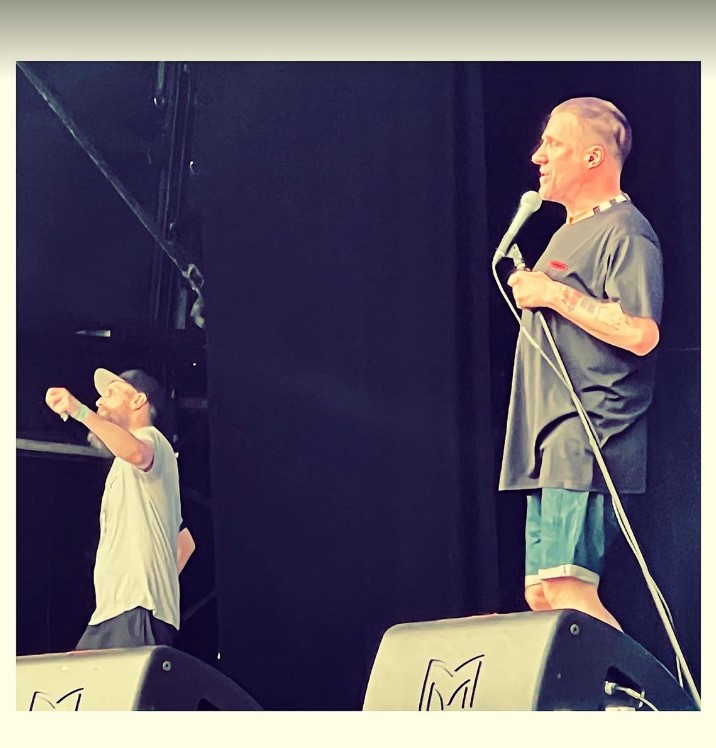 After an engaging 45 minutes spent listening to Sleaford Mods in conversation, the prospect of seeing The Libertines officially opening the main stages was an intriguing one. Over the last few festivals, there has been a tendency to give this slot to heritage indie acts, and when they work well, they can be brilliant (see Blondie and The Pretenders).

In the case of Doherty et al though, songs that were written like they would come round and burgle your flat when you’re out have turned into ditties that would be more inclined to cook you a fondue and greet you at the door wearing a muu-muu. 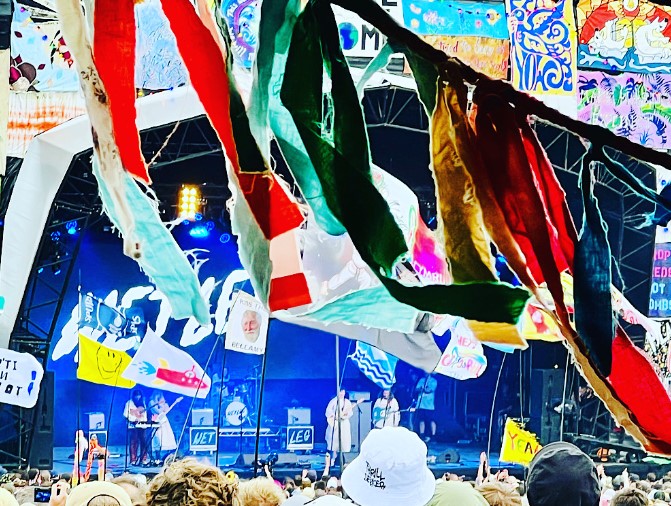 Wet Leg amid the ribbons

The John Peel Stage saw some particularly barnstorming performances this year. Sigrid harnessed the energy of thousands to produce a feel-good wall of sound, which resonated straight into Self Esteem’s astonishing set. Rebecca Lucy Taylor (in a Guardian talk with Alexis Petridis) had voiced concerns that morning that the only attendees for her set would be the hundred or so of us watching then. She needn’t have worried.

In a fetish corset inspired by both Madonna and the Meadowhall Shopping Centre, Taylor presented a set that has been honed by constant touring since the release of Prioritise Pleasure at the tail-end of 2021. It’s a soulful, emotional, funny and inspiring performance. There may have been tears shed by this reviewer. 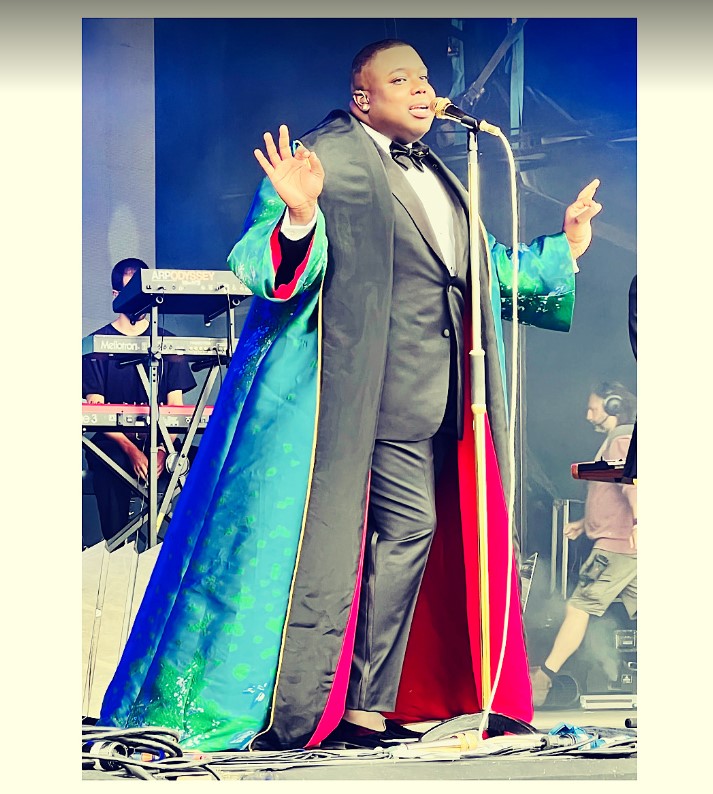 Tears were also shed during the first set by Gabriels on the Park Stage. Singer Jacob Lusk seemed to channel the ghosts of Nina, the original Billie and Ella into something completely their own. Theirs is a showbiz, churchy presence with a huge amount of vulnerability which, alongside Ryan Hope and Ari Balouzian manifests itself in beautiful gospel-soul. There are feisty backing singers (who also shed a tear at one point), a phenomenal version of Streisand’s ‘The Way We Were’ and a very fighty female gatecrasher attempting to beat up a security guard before pulling down the side hoarding. This only served to expose the band when they came off-stage, allowing an additional ovation. 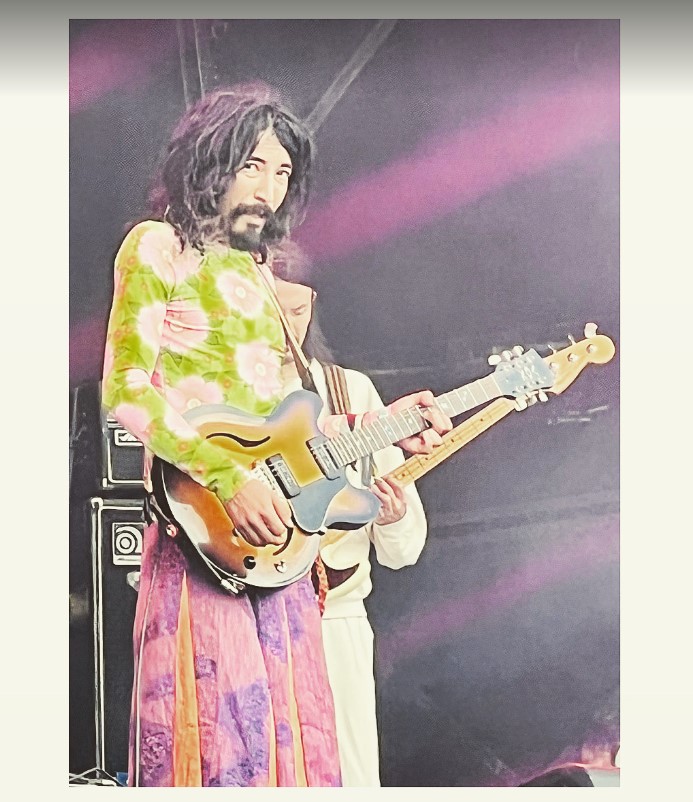 There were greats sets from a rejuvenated (resurrected?) Jesus and Mary Chain, Yard Act and a final hurrah from Japanese psych-maestros Kikogaku Moyo. I felt, as usual, that I had barely scratched the surface, but on reflection, seeing 27 bands across three full days was a pretty good go.

Emily Eavis has been vocal about changing the gender dynamic at festivals, and it has been hugely satisfying to see the likes of Billie Eilish, Self Esteem and Phoebe Bridgers step into their rightful places. In a weekend punctuated by the US Supreme Court’s overturning of Roe vs. Wade, it was inevitable that performers at this most political of festivals would respond loudly. It’s already been well-reported that the Olivia Rodrigo and Lily Allen duetted on a version of ‘F*** You’ dedicated to SCOTUS, and this rage was palpable in performances from Big Joanie and Amyl and The Sniffers amongst many others. 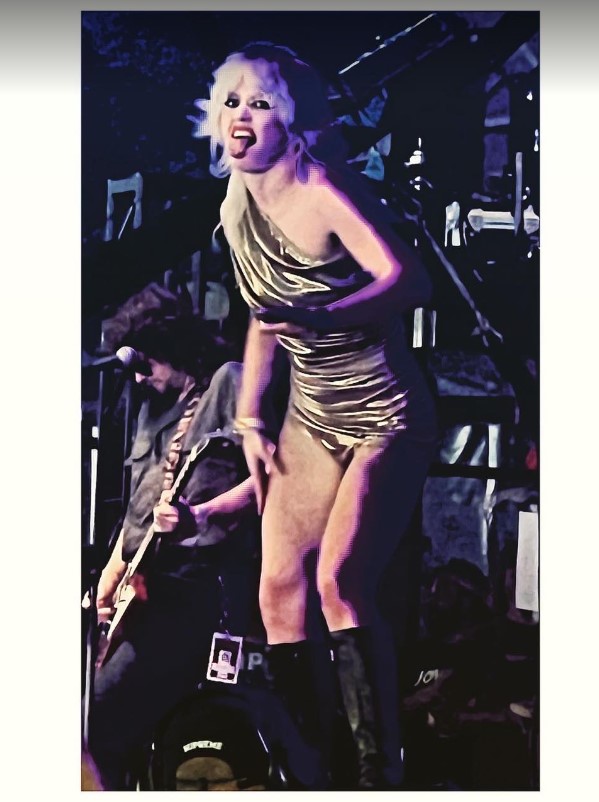 Amyl and the Sniffers

My main takeaway from this year’s festival is that we are starting to see a better foundation for the next generations. I want my children to look at future line-ups and see strong role-models, willing to stand up for what is right. To have access to the Greta Thunbergs, and Arlo Parks’ of this world, and know that it’s good to be brave.