The Palace Guards is the first solo album from Cracker and Camper Van Beethoven front-man David Lowery, and it is something of a triumph. Originally conceived as a set of songs that would be released only on YouTube (you can read more about this on his excellent ‘300 Songs’ blog here) it is a typically esoteric nine song collection recorded with a variety of accomplices over several years. 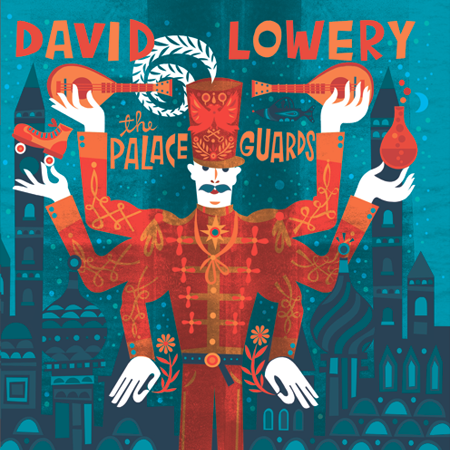 Opening with the titular ‘The Palace Guards’ the album throws an immediate curve-ball, the song doesn’t sound like either of his bands, it sounds more like Pavement. Two thirds of the way through the song it takes a twist and sounds just like a David Lowery song, and a good one at that. The songs on the album sound in parts like you’d expect it to, a bit Cracker here, a bit Camper Van Beethoven there and even some snatches of Sparklehorse (the late Mark Linkous guests on the album). This is no surprise, I certainly wasn’t expecting a brand new direction for this record, and a it is an album that has an identity of its own.

The songs are top quality throughout, we get stomping country on ‘Raise ‘Em Up On Honey’, indie rock on ‘Baby, All Those Girls Meant Nothing To Me’ and (best of all) whimsical balladry on ‘I Sold The Arabs The Moon’. There really isn’t a bad track on the album, and in the few weeks I have owned the album, it has already become my most played record of the year.

You can tell that the songs here were not conceived as an album. They don’t flow in a sequence as a purpose created album would, some changes of pace and style are a little jarring. This doesn’t seem to matter though as the quality of the songs is so good, it is a little like listening to a “best of” collection from a set of albums you’ve never heard. The one downside of the album is the length, at only 9 tracks it is over all too soon. But hey,that means that you get an album, as Sum 41 would say, that is all killer, no filler.

To buy a signed copy of the  album (and get an immediate digital download) go to David Lowery’s website here.