London seven piece The Complete Short Stories have an eclectic taste according to their press release. From Kate Bush to Sonic Youth, from Pink Floyd to Swervedriver the band “represents the coming together of seven individuals’ creativity and devotion,” gushes the release.

In a way that bunch of artists perfectly encapsulates their debut album Perfectly Still. Some of it is exciting, as Swervedriver and Kate Bush were at their peak.  But towards the end some of the tracks feel a little tired and flabby, a bit like Pink Floyd in their middle aged pomp. The album was recorded in late night studio sessions, adds the release, which may explain this loss of energy. 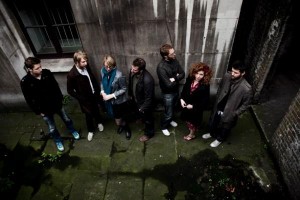 The best tracks include most of the first half from  opener ‘A Million Ways’ through to the album’s singles ‘Burn’, ‘One Blank Channel’ and the standout track for us, ‘No Direction’. But by final two tracks ‘Circus’ and ‘Two Acrobats’  the interest level drops.  If this was a mini-album of just the first seven tracks it would have got a far higher score from us. But how often do you see mini-albums released these days?

On the whole there’s far more positives than negatives to take away from this solid debut. Kerry Adamson’s vocals are a particular highpoint, strangely reminiscent of Alice Nutter from Chumbawumba (that’s a good thing by the way). The range of styles, while broadly speaking indie rock, is also good. ‘A Million Ways’ in particular will please those that like Shapes and Sizes, whose 2010 album Candle To Your Eyes had a similar 80s indie feel to it.

Perfectly Still can be downloaded here from April 18.