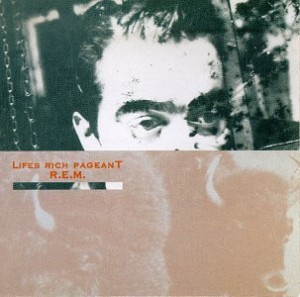 Has there ever been a better purple patch in music than REM’s during the 1980s and early 1990s? From Murmur through to 1992’s Automatic for the People the quartet from Athens, Georgia, evolved magnificently from a college radio niche act to stadium fillers.

Among this clutch of albums Lifes Rich Pageant marks a significant ramping up of their success and was their first to go gold in the US.

Its success, as with all their early albums, is its timeless approach to music. Using basic drums, guitar, bass with a little keyboards or accordian here and there and shying away from the studio excess of the time.

But Lifes Rich Pageant also  remains such a great album because of the sheer sense of fun and excitement that pours out of each track. What seems incredulous now is that it garnered just two singles ‘Fall on Me’ and a cover of The Clique’s ‘Superman’, sung by bassist Mike Mills. Arguably pretty much any of its 12 tracks were good enough for the singles chart.

Take ‘Just a Touch’, with its repeated line “Day in the Life”. It sounds more than just live, it sounds like a band leaping and holloring and steamrollering through a track with all the energy they have. Lead singer Michael Stipe swirling around, Peter Buck and Bill Berry focused on their guitar and drums and Mills beaming away at his friends. There is a genuine togetherness of a band  that comes across from this track.

There are quieter moments as well, such as ‘Swan Swan Hummingbird’, but the same warmth shines through track after track.

This is the latest in a serious of remastered issues of REM’s back catalogue and all are well packaged with extras to provide an insight into the band at the time.

While the extras on Neonfiller Top 100 Album and the band’s debut Murmur featured a live show, this latest reissue focuses on the demos and discarded songs.

While the demos of the songs on the album are interesting to hear, especially how ‘Swan Swan Hummingbird’ has barely altered from demo to album track, it is some of the b-sides and discarded songs that provide most of the interest.

‘All the Right Friends, a discarded song from Murmur and one of the first they wrote makes another failed attempt to get on an album. But its track record of rejection shouldn’t put you off, it stands the test of time and only missed out because of the high quality of Life’s Rich Pageant and Murmur’s track listings. Another is the original demo of ‘Bad Day’, another reject from the Lifes Rich Pageant sessions that later became a hit some 17 years later, when it was released as a single and appeared on their compilation In Time: the best of REM 1988 to 2003.

How should Lifes Rich Pageant be seen now? Quite simply one of REM’s best albums and one of the best albums of the last thirty years.