The north east of England continues to dazzle us at Neonfiller.com, from the inventive pop of Sunderland’s Field Music to  the beautiful Northumbrian lilt of The Unthanks.  Now another act is on the scene, Jonny Kearney and Lucy Farrell, who are billed as a contemporary folk duet but offer so much more.

Kearney, a native of Northumbria and the main songwriter of the act, met Farrell, who is originally from Kent, at a folk music course in Newcastle in 2005. Since then they have been performing their intimate take on folk music across the small festival scene and have picked up some influential friends along the way.

Nominated for a 2011 BBC Folk horizon award, given to emerging new talent, they have clearly caught the ear of Radio 2’s Mike Harding and his production team. Rachel Unthank and her husband Adrian McNally are also admirers and produced this wonderful debut from the pair, at their home in Northumberland.

Following on from their 2010 North Farm Sessions EP Kearney and Farrell have once again created a fine set of well crafted songs with a genuine warmth. When we saw them at End of the Road Festival last year our reviewer referred to them as twee. I can see how live in a festival tent Farrell’s soft vocals and Kearney’s understated guitar playing could appear like that. But it would be wrong to dismiss them as simply twee when there is so much strength to their simple, intimate style of playing.

While the beating heart of this  set of tracks is Kearney and Farrell’s vocals and simple guitar playing Unthank and McNally have added some welcome moments. A little piano from Unthank here and there, and even a sax on opener ‘There’s a Disease’. 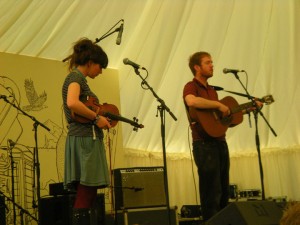 The song writing is another strength with ‘Just Like The Old Days’ showing just how good Kearney’s ear for a tune is. ‘Green Leaved Trees’ is another of his song writing high points.

And so it goes on with track after track of beautiful harmonies and creative, simple folk music, livened up with a brief moment of jauntiness on ‘Stand Up Show’ and some intricate guitar picking on ‘Call Yourself a Friend of Mine’.

While steeped in the contemporary folk movement of the north east there’s something almost West Coast America to the songs, especially on ‘Call Yourself a Friend of Mine.’ For those familiar with Asthmatic Kitty artists DM Stith and Shannon Stevens, this is exactly the kind of album those two US artists would make if they were ever to team up.

Kearney and Farrell are just starting out  but on the evidence of this debut they have already found their voice and are destined to pick up more friends as further releases follow.