The Miserable Rich are really throwing themselves into the promotion of their latest album Miss You In The Days, which mixes ghost tales with stories of love. Not only was it released on Halloween but they have decided to select some creepy, haunted venues for their promotional tour. 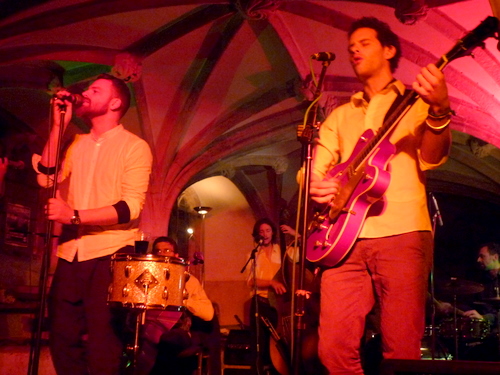 In Bristol’s St John The Baptist’s church crypt they may just one have found the best venue yet. With its knights’ tombs and low, ornate ceiling it is like no other gig venue I’ve been to.

With no toilets, they were provided by the nearby car park and pub, and  a bring your own booze policy this venue is low on amenities but high on atmosphere.

To get us in the mood the band have selected comic bard Alabaster de Plume as one of the support acts. While his medieval and modern tales of  swearing, sex and drinking would have gone down a storm down the A37 at the Glastonbury Assembly Rooms this largely  urban  crowd just seemed a little confused , especially by one song seemingly about a “wank stained goatee.”

Alabaster fared much better introducing the band, providing an extended intro to their opener Imperial Lines and some surprisingly good saxophone work when he joined the band for some later tracks. 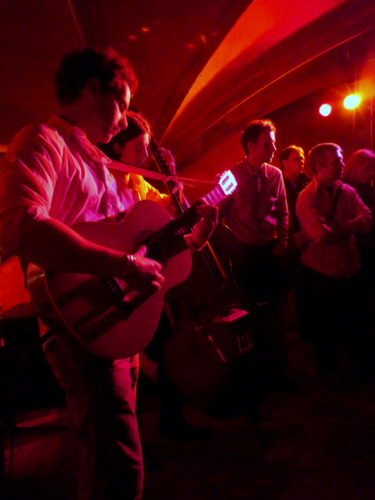 The encore among the crowd

During the hour long set The Miserable Rich  (who were named as one of our Top Ten Acts To Watch out for in 2011) are clearly and  quite rightly pleased with their new album, giving the bulk of it an airing tonight. Live lead singer and songwriter James de Malplaquet also gets a chance to explain some of the stories behind the tracks, from the hitchhiker who never reaches his destination to the pauper who kills himself after being separated from his aristocratic lover.

Among the highlights were final track in the set Ringing the Changes. While on the CD this waltz like number conjures up images of a Victorian couple dancing surrounded by ghouls and spirits, live it transforms into a rowdy Elizabethan drinking song.

A couple of older songs, Let Me Fade from their second album Of Flight and Fury, which was one of Neon Filler’s Top 20 albums of 2010, and Boat Song, from their debut Twelve Ways to Count also got an airing. The former because it has similar themes of love and loss and the second because it was perfect for the special encore they surprised the crowd with.

This involved the band coming among the audience, an easy feat for de Malplaquet , less so for the double bass player. The version of Boat Song they performed in this intimate, completely acoustic setting was for me the highlight. The final song of the encore, performed back on stage, was True Love, the one about the lovesick pauper.

Among the lasting impressions is just how good this band are as musicians, especially violinst Mike Siddell. I was informed by my more musical companion that Siddell apparently is a master of the flautando,  something very complicated involving making a violin sound a bit like a flute. De Malplaquet also deserves credit for a vocal performance that was precise and beautiful, not a description often used for male singers.

The only downside, and it’s the same gripe we had when we saw Singing Adams in Bristol in September, where were all the people? Around 50 turned up, thankfully enough to give the creepy venue some added atmosphere, but that is just 50 people seeing one of the UK’s best live bands, and what’s more playing a unique gig.  De Malplaquet pledged to come back to the venue but “with better publicity next time.”

“We’re just a small band trying to push our music, so thanks for making the effort to come and see us,” he added. Not sure how small they will continue to be on this evidence.