As I walk into the Buffalo Bar for the album launch of Rotifer’s new album ‘The Hosting Couple’, it seems strangely empty given that the first band is on in only fifteen minutes.  But this crowd are seasoned gig goers with expert knowledge of set times, within a few minutes of first band Ralegh Long & The Primary 3 taking to the stage the venue  soon fills up with a noisy and dedicated midweek crowd.

Ralegh Long eases the rabble into their evening with two songs which he confesses are “boarder-line depressive”.  This piece of honesty calms any doubters as the band play ‘their most upbeat number. 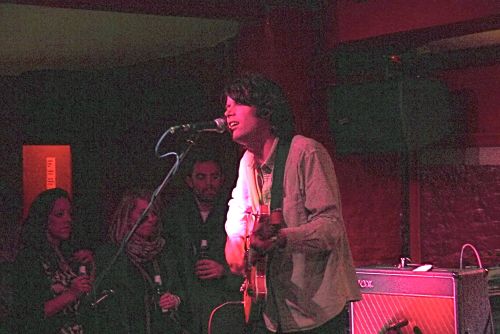 Despite their slightly grungy persona Ralegh Long & The Primary 3 are tight, but in a small venue like this, Ralegh’s voice struggles to make the impact that it would in a larger venue with more echo.  The group’s style is good though, and the chorus of ‘Range’ hasan uncanny resemblance to Simon & Garfunkel’s ‘America’.

Next up is Rotifer , the band fronted by Austrian born indie-popster Robert Rotifer and now a three piece featuring former Hefner man Darren Hayman on bass  and Ian Button (ex-Death in Vegas) on drums.  The atmosphere instantly changes as Rotifer jumps into the set head first making the crowd and most of all Hayman bop along to their 60’s and 70’s influenced music.  The band churns through their set which includes The Hosting Couple opener ‘The Drone’ with comfortable and experienced ease, with rocky solos being made to look simple. 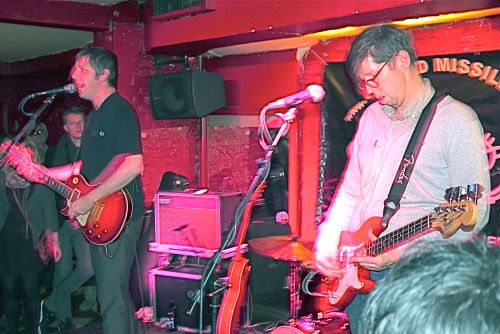 In between songs Rotifer gets laughs from the crowd as he explains the how ‘The Hosting Couple’, one of the first released on Edwyn Collins’ AED label,  is based on his first holiday without his parents to Canvey Island.  Rotifer declares himself “challenged” when his beer froths up (probably on his guitar), but he certainly is not when it comes to captivating the crowd.  They happily bounce along to humorous songs about the contents of a kitchen and space, including The Cosmonaut Who Never Flew, one of two Rotifer songs on the Vostok 5 album released this year to honour the heroes of space travel.

The set finishes with an almost ‘London’s Calling’  rendition of ‘Jazz Cigarettes’, which concludes a highly polished yet relaxed and entertaining set.

By the time Allo Darlin take to the stage the small room is packed.  The four piece rip into the set and the overriding impression is how much the band enjoy playing their music.  Bassist Bill Botting jumps around with a huge grin on his face, making the small wooden stage shake, spilling his beer in the process.  He doesn’t care one bit though. 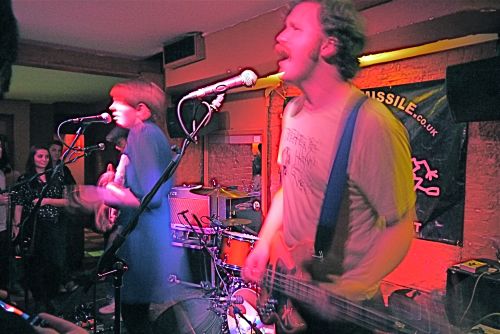 Just as the band have got the crowd dancing more than they have done all night, lead singer Elizabeth Morris tells the crowd in her shy but affectionate way, ‘we only play this at this time of year’.  The song they play is ‘Will you please spend new year’s eve with me?’.  The performance is quite beautiful, with soft and cute vocals and completely in-time whistling from the other three members.  The crowd is so transfixed by the song that when it finishes there is a pause before they realise it has finished.

The remainder of the set is high tempo and there is a genuine air of disappointment when they play their last song.  The hyperactive crowd asks for an encore, and the band are more than happy to satisfy with what they describe as a “jumpy one”.  Their choice is Woody Allen which seems to do a good job of sending the crowd home satisfied, and ends a successful night at the Buffalo Bar.