I got a warm feeling when I first listened to Lemonheads Hotel Sessions. Hearing a spritely, 25-year-old, Evan Dando playing acoustic tracks, which would later appear on the album Come On Feel The Lemonheads, not only evoked feelings of nostalgia for the music but also for my own youth. Memories of crowdsurfing at Glastonbury festival 1994 in the warm, June sun to Down About It came flooding back. Ditching college for impromptu road trips where these songs would crop up on mixtapes that used to take me hours to make. Smoking sticky black hash with my friend Robert in my bedsit while he worked out the chords to (cringe!) My Drug Buddy on his acoustic guitar. You get the idea… 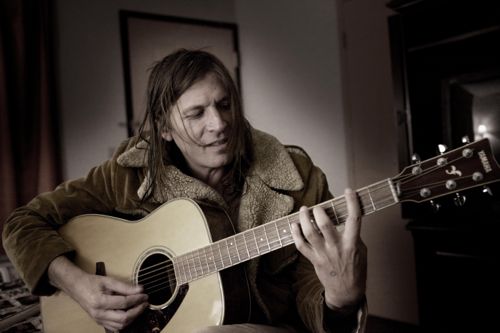 Hotel Sessions was recorded for $53, that’s $50 for the Walkman it was recorded on and $3 for the tape inside. By the sound of it, no expense has been spent on the mastering either.  These songs would be lost on an old fashion mixtape or modern day i-Tunes playlist, almost too quiet to hear.  It is about as lo-fi as you can get. Just one man, at the height of his musical career, in a hotel room in Sydney playing songs into a Walkman, complete with birds singing outside, traffic noise and that lovely background hiss that only a cheap tape recorder can create.

Hotel Sessions was originally recorded for the Lemonhead’s Australian agent at the time, Stephen Pavlovic, so it does have a promotional feel to it. It’s basically plugging the album Come On Feel The Lemonheads and it would be more at home as a bonus disc on an album re-issue rather than as a release in its own right. That said, this is still a nice piece of musical memorabilia that most fans will lap up.

I met Evan Dando recently after a low key Lemonheads gig in Chattanooga, Tennessee. He approached me in the men’s toilet of all places and thanked me for coming out to see the show. We later got talking outside the venue and my girlfriend and I ended up joining him and the support band back at their hotel for drinks. We drank until the early hours and he played us some of his favorite songs on his acoustic guitar – Townes Van Zandt, Neil Young, Dinosaur Jr, Cat Stevens, Hank Williams, as well as a couple of new songs he was in the process of writing.

After over 20 years of playing and even at 4am on a Sunday morning he seemed in his element, enthusiastically clutching his guitar and taking requests like a one-man acoustic jukebox and sharing anecdotes, like the time he visited Keith Richards at Redlands and sat at the same piano that Gram Parsons once played.

I sometimes worry about the future of my old favorite bands. Hardly any are still together and the ones that are jump from small record label to even smaller record label trying to keep afloat. Artists like Evan Dando give me hope though. I’ve heard nothing but good things from friends who’ve attended the recent, sold out It’s a Shame About Ray shows and seeing his enthusiasm and genuine love for music in person has made me realise that he is unlikely to ever retire.

The Lemonheads Hotel Sessions may be a flimsy release but it shows that you don’t need big record company dollars to get your music out there. It is also comforting to know that as long as there are recording devices, however cheap, and people to listen Evan Dando will continue to make music.