Writing (or more accurately procrastinating about) this review has taken an unusually long time, and I’m not a quick writer at the best of times. Something about the process was particularly difficult with regards to Port Of Morrow, the forth album by James Mercer’s The Shins. Partly the problem was due to the weight of expectation, I love everything the band has recorded (and regret not including Chutes Too Narrow in our all time top 100 list) and this record is their first for five years. This lack of objective perspective made me worry that my responses would be as a result of a desire to love the album rather than the merits of the album itself. 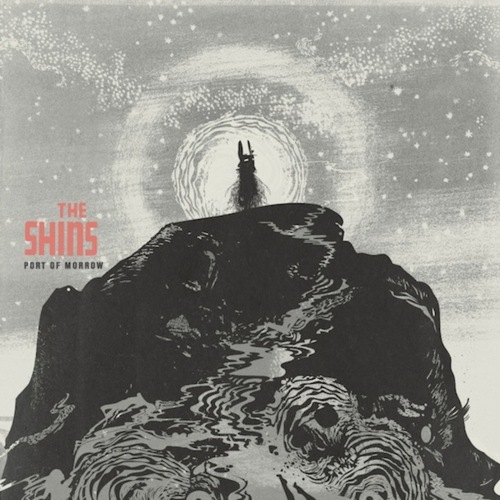 Putting off writing the review made things worse as it meant that I got to read a number of other reviews whilst still preparing to write this one, and most of those reviews were pretty luke warm. This made me doubt my judgement even more, I was enjoying the record but maybe it was a bit of a dud and my judgement was flawed?

The breakthrough came (and I apologise for the rather meandering nature of this review) whilst I was running over the south downs during a beautifully sunny early evening. In isolation, with the album playing on my MP3 player, I found myself able to hear the songs on their own merits for the first time and came to the conclusion that this is a rather wonderful album.

The album was recorded with a revolving cast of players, including a couple of contributions from the now discarded original Shins Dave Hernandez and Marty Crandal, and some slick production from Mercer and Greg Kurstin. The album is like a selection box from Mercer’s career with different tracks representing different records from his back catalogue. The opening track ‘The Rifle’s Spiral’ has the production style of his Danger Mouse collaboration Broken Bells, and is as good as anything from that record. Lead single ‘Simple Song’ carries on where Wincing The Night Away left off, and is the kind of big sophisticated pop tune Mercer is so adept at writing.

Other nods to the past are ‘September’, a soft acoustic number that could easily have been left over from the Chutes Too Narrow sessions and ‘Bait and Switch’ taking us all the way back to Oh, Inverted World. However, these songs don’t feel like retreads, at only four Shins albums in 11 years Mercer has hardly stretched the Shins sound. It also doesn’t mean that Mercer isn’t moving forward with this album, the big glossy pop sheen in the production and the generally warmer tones make this a different kind of Shins album.

‘No Way Down’ is just a great piece of glossy pop, all hooks and warm vocals. It is exactly the kind of song that would to make the Radio 2 playlist, but the only one that would finish with a lyrical couplet like “Apologies to the sick and the young, get used to the dust in your lungs”. There have been some criticisms of Mercer’s lyrics on the album, his general happiness with life and warm outlook has been sneered at by the cynical indie critics. I find the generally upbeat and content tone quite refreshing, and if anything Mercer’s lyrics sound better a little more grounded and less arch than before.

‘Fall of ’82’ is like a lost track from the year of its title, bringing to mind Billy Joel, Hall and Oates and Supertramp. One of the reasons that this shameless homage to MOR works so well is that it sounds honest, it sounds like Mercer loves the music of his youth, it is a romantic song and not tinged with the smug irony of the guilty pleasures brigade. And the lack of irony makes the romantic ballads like ‘Taken For A Fool’ work pretty perfectly as well.

The lack of a solid band, and a range of styles, does mean that the album feels a little bit incoherent, and the slick sheen of production isn’t going to be to everybody’s taste. However, this is an album that has been getting regular play on Radio 1, radio 2 and 6 Music, and there aren’t many albums that can appeal so well to all three of those demographics. I can’t see myself finding many albums this year that I’ll enjoy as much as this one, it is still Spring but I think I have found my feel good record for the Summer.